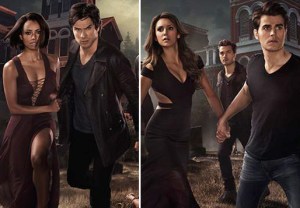 Warning: The following contains spoilers from Thursday’s season premiere of The Vampire Diaries.

The Vampire Diaries returned for Season 6 on Thursday night, but not all of its players were back to their old selves.

Elena, for one, was suppressing her grief by taking witchy drugs to “see” Damon and feeding on humans on the outskirts of Mystic Falls — not that it was helping. To truly make the pain go away, she asked Alaric for a drastic favor.

Then there’s Stefan, who was off living a new life with a new girl, while Damon and Bonnie were bonding… somewhere.

Below, executive producer Caroline Dries weighs in on the duo’s whereabouts, Ric’s response to Elena’s request, the love triangle’s future and much more.

LOST IN…? | So where are Damon and Bonnie hanging out? “We’ll figure it out in the next episode,” Dries reveals. “They’re discovering it along with the audience.” Could the presence of Collective Soul’s 1993 ditty “Shine” and Damon’s flannel attire mean that they’ve gone back in time? “It’s supposed to make you ask questions like that,” is all Dries would say. (Hmm, could the upcoming 1990s Damon/Stefan flashbacks in Episode 4, which “help tie together a bunch of storylines,” have something to do with all this, too?)

FORGET ME NOT | Overwhelmed with the idea of feeling the loss of Damon for eternity, Elena asked Original vamp Alaric to compel her to forget she was ever in love with the elder Salvatore. But will Alaric actually go through with her request? “That’s a big part of the next episode,” Dries replies. “Damon is his friend, too. For her, it’s a hard decision. But for him, it’s also like, ‘I don’t know if I can do this to my friend.’ So that will be his emotional journey in the next episode.”

And although it may seem like Elena’s love life is dead, what with Damon gone and Stefan cutting off ties to Mystic Falls, Dries assures, “We definitely keep the love stories alive. They may not play out in a traditional way, but they will feel very satisfying. … I think it’s done in a way that feels fresh for a show that’s in Season 6 and has had these same characters in this love triangle for a long time. I don’t really call it a triangle because Stefan has become more of like a soul friend of Elena’s. He’s dealing with his own stuff, but these two are still very connected. It’s more of, ‘How do we maintain Elena and Damon’s love story while he’s not present?’” ALL HOPE IS NOT LOST | Stefan’s new love interest will be sticking around “for a little while,” providing a glimpse into what Stefan’s “process is as a vampire, starting over and living a different identity,” Dries describes. Part of beginning his new life, as we learned in the premiere, is abandoning any hope of bringing back Damon – not that everyone shares that pessimistic outlook. “Enzo is going to turn out to have had a different reaction to Damon’s death,” Dries previews. “He’s not going to give up on him. His point of view on Damon is in direct conflict to Stefan’s point of view on him.” Meanwhile, Enzo and Damon’s other “bro,” Alaric, won’t be drowning their sorrows together any time soon. “If anything, they will not be the best of friends,” the EP teases.

MAN ABOUT TOWN | Thriving in a supernatural-less Mystic Falls, Matt has found a “father figure” in Colin Ferguson’s community protection leader Tripp. But this being The Vampire Diaries, “not everyone is who they say they want to be,” the EP warns. “But he’ll ultimately become an interesting layered, dynamic character that’s not necessarily a good guy or bad guy. He actually represents a normal person’s point of view on the whole vampire world.” As for Matt’s roommate, Jeremy, “he’s going to try to find some meaning in these first few episodes,” Dries says. “But he hasn’t hit his rock bottom.” Yikes.

ANGER AND LUST | Tyler and Liv may have been all testy with each other in the season opener, but we know what’s underneath all that tension: hormones! “They’re going to part of each other’s storylines,” Dries admits, adding that Liv will help Tyler “with his resisting of indulging in his rage.”

HERE COMES TROUBLE | Border stalker Elena is the least of everyone’s troubles. A new villain named Kai (played by The Carrie Diaries‘ Chris Woods) will emerge in a few episodes, and “he is just like a crazy person,” Dries describes. “Very charismatic and charming and psychotic. Likeable and unlikable in all the right ways. He’s going to stick around for a while.”

Vampire Diaries fans, should Alaric fulfill Elena’s request? What are your theories on Damon and Bonnie’s “Shine” moment? And how mad are you at Stefan for not returning Caroline’s calls? Hit the comments with your thoughts and grade the episode via the poll below!