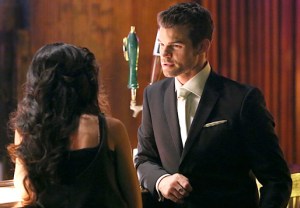 As The Originals‘ second season unfolds, Elijah will find himself surrounded by new faces, including a certain female counterpart with whom he’ll be spending plenty of face time — but don’t worry, it sounds like this is one ship that won’t be leaving the dock.

I’m talking, of course, about Gia (Nishi Munshi), one of Marcel’s new vampire pets we met on the season premiere. Despite multiple sneak-peek photos of the twosome at work and play, Daniel Gillies insists that Elijah will be merely a “mentor” to the budding warrior.

“There certainly isn’t a romantic dynamic happening there,” Gillies explains to TVLine. “I don’t want the fans jumping to that conclusion.”

Gillies adds that training Gia and the other vampires will also provide a welcome distraction from Hayley’s ongoing “identity crisis,” which will continue to drive a wedge between the brothers, as seen in the preview clip from Monday’s episode (The CW, 8/7c).

“Hayley has far more sway over Elijah than Klaus does; if she tells him to back off, he’ll listen,” Gillies says. “As much as Elijah wants to honor this idea he’s been striving for — the reunification of his family — at the moment, he really just wishes this woman peace.” 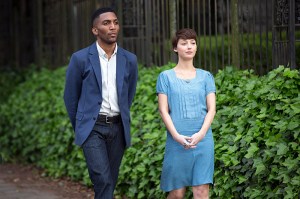 Speaking of that all-important “F” word, there’s also the small matter of Klaus and Elijah’s resurrected parents and siblings wanting them dead. At the moment, Gillies says Esther poses a far larger threat than Mikael — partially because Davina currently has the Mikaelson matriarch by the fangs, but also because the boys’ mother is just that powerful.

“Mikael has always seemed like a threat that Klaus and Elijah could handle if they were able to work together,” Gillies explains. “But Esther is a whole different kettle of fish. She’s not just the most powerful witch in New Orleans; she might be the most powerful creature in their entire dimension.”

“I think the viewers are going to be shocked, not only by parts of Tatia’s history, but by her history with Klaus and Elijah,” Gillies teases. “I absolutely adore Nina and I’ll take any chance I can to work with her.”

OK, talk-back time: How do you hope this latest Mikaelson family feud will turn out? And are you still holding onto hope for Hayley and Elijah? Browse preview photos, then drop a comment with your every thought below.