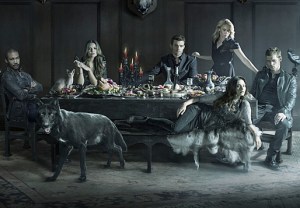 Monday’s season premiere of The Originals witnessed a major power shift in New Orleans, as old enemies were pushed aside and even older enemies returned to settle their scores.

First, a quick recap of the premiere’s biggest twists: Hayley took care of Francesca once and for all; Klaus was restored to full strength, following the destruction of the moonlight rings; new witch “Kaleb” was revealed to actually be Kol; and Finn maneuvered into a new position as Cami’s college advisor “Vincent.”

Below, executive producer Michael Narducci reveals what else the Mikaelsons have in store for us this season, including Hayley’s evolving relationship with Elijah and Esther’s plans for baby Hope and Rebekah. AUNTIE BEX | If you found yourself chanting “More Rebekah, please!” after Monday’s premiere, we’ve got some good news: “We’re going to see Rebekah and we’re going to see baby Hope, and that’s going to be an important part [of the season],” Narducci teases. “As to what Esther’s plan for that baby is … Esther thinks the baby died. Esther doesn’t know where Rebekah is. She’s coming back with a definite agenda that we’ll start to see unpacked in Episodes 2 and 3.”

HAYLIJAH | If at all possible, Hayley and Elijah’s relationship is going to become even more complicated in Season 2. “She’s a mess and Elijah sees that,” Narducci notes. “But at the same time, he recognizes, ‘I can only help her so much because I’m not what she is. The person who is what she is … is my brother.’ You’ll get to see how that plays out, and I’d caution against anyone using the idea that this is going to be some kind of love triangle.” (Phew!)

JOSH’S BIG BREAK | After everything that happened in Season 1, you might wonder why Josh would stick around in New Orleans. Turns out, Josh is wondering the exact same thing. “He’s kind of Marcel’s last guy from that old regime, and he’s trying to figure out, ‘What am I fighting for?'” Narducci notes. “Coming down the line, we’re going to tell some really great romantic stories, and Josh has a really great story coming up.”

SIRE STRUGGLES | Narducci says Davina “absolutely” wants to break the sire bond — and she’d better do it quickly: “That’s going to be an obstacle keeping Davina from just unleashing Mikael. There is a world where she says, ‘To hell with [Klaus]. I hate him. He killed the love of my life, Tim.’ But if she does that, she knows she’s going to be even worse than Klaus … because, ultimately, that would lead to the deaths of [Marcel and Josh.]” THE GREAT ESCAPE | That said, Narducci admits his team would be “doing ourselves a disservice as storytellers if we brought Mikael back and just kept him on a leash the entire season. … There’s a lot to come with him, and Sebastian Roché is an incredible presence.”

* “There are going to be even more flashbacks this season,” Narducci says, hinting that we’ll see more of Finn and Kol’s original portrayers, as well as younger actors playing them in even further flashbacks.

* Mikael and Esther’s history will be explored: “In Episode 16 last year, Klaus said, ‘Something made my father the way he was.'” Narducci recalls. “We want to tell that story. It’s an interesting part of why [Mikael] goes around hunting his children and calling himself ‘the Destroyer.'”

* Finn and Esther’s true interest in Cami will soon be revealed. “They have one of the coolest reasons possible for wanting to get to know [her],” Narducci says, calling the twist “freaky.”

* Speaking of that duo, we’ll also find out why Finn is such a damn mama’s boy.

* Lastly, how long can we expect Hope’s secret to hold out? “I think that would be awful,” Narducci says of the wrong people finding out Klaus’ baby is still alive. “And it would lead to great dramatic conflict.” (Wink.)

OK, your turn to talk: What did you think of the premiere’s big twists, and what are you hoping from the rest of Season 2? Browse new photos below, grade the episode, then drop a comment with your full review.