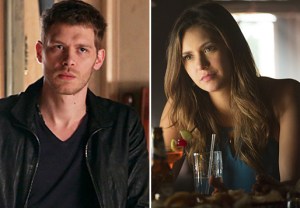 Now that the new seasons of The Vampire Diaries and The Originals are finally underway, it’s time to look ahead to the series’ next major milestone: November’s highly anticipated crossover.

“It’s shocking, I think,” Joseph Morgan tells TVLine of the episode, which will find Nina Dobrev slipping into the role of original doppelgänger Tatia — whom Klaus and Elijah both fell in love with — for the first time. “It’s pretty grim. I don’t want to spoil too much, but it’s definitely revealing of the brothers and what happened back then.”

Per executive producer Michael Narducci, the episode flashes back to “the time of the Vikings,” a period which Morgan believes is “vital” to revisit if you want to fully understand where Klaus and Elijah came from: “It was when they’d just become vampires and Klaus’ curse was placed upon him by his mother.”

In addition to revealing more about the Mikaelson brothers, the Nov. 4 episode will also fill in the blanks about Tatia, a character only mentioned once thus far on The Vampire Diaries.

“We tell a story that will make you understand [Tatia’s] fate and what happened to her,” adds Narducci. 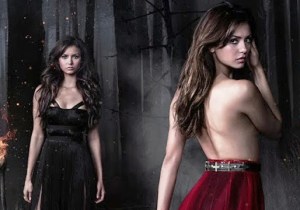 Dobrev says her initial response to the crossover was something to the effect of “Whoa, whoa, whoa! We’re adding another character?” but it didn’t take long for her to warm up to the idea.

“[Executive producer] Julie Plec pitched the story, which was actually cool and made a lot of sense, so that got me excited,” Dobrev admits. “As much as I joke and say that playing a lot of characters is crazy — which it is — it’s also fun to create new people. It helps keep things fresh after six years, you know?”

Although Morgan is quick to laugh off a “steamy” encounter between Klaus and Tatia, Dobrev hints that there might be some romantic action in store for fans. And after six years, she’s become something of an expert in that department.

“I’ve even kissed Steven [R. McQueen], unfortunately,” she says of her characters’ many encounters. “Well, it wasn’t a kiss, but I had to do mouth-to-mouth with Jeremy as Katherine. I remember reading that episode and being like, ‘Really?'”

What are you hoping to see when Dobrev visits The Originals next month? Browse new photos from Season 2, then drop a comment with your thoughts below.