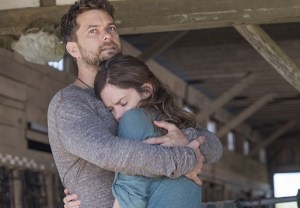 After five seasons of dealing with the grueling production schedule on Fox’s Fringe, Joshua Jackson had no desire to do another television series.

But just as it is for the characters at the center of his new TV gig, temptation was hard to resist.

In Showtime’s The Affair (premiering Sunday at 10/9c), Jackson stars as Cole, a Montauk, N.Y. rancher struggling alongside his wife Alison (played by Luther‘s Ruth Wilson) over the loss of their child. While Cole copes by closing himself off, Alison starts a dalliance with visiting, married writer Noah (The Wire’s Dominic West), and the action is told from Alison’s and Noah’s points of view — with differing details.

TVLine chatted with Jackson at the Beverly Hilton during this year’s Television Critics Association summer press tour. Below, he talks about how Cole compares to the actor’s past roles on Fringe and Dawson’s Creek and why he relates to The Affair‘s unique narrative structure. The actor also weighs in on the Fox series’ swan song and his princess “daughter.”

TVLINE | Coming off Fringe, what were you looking for in your next TV project?
What I was looking for in my next TV project was nothing. I very adamantly wanted to take a break because it’s hard, as you can ask those boys. [Points to Supernatural’s Jared Padalecki and Jensen Ackles, who are sitting nearby] They did it for longer than I have. But you know, 22 episodes a year, it’s a grinder, and you stack a couple of those on top of each other, and it’s difficult. So I took a good, long time before even starting to read scripts again and was not really all that engaged in the process. But last summer, there were two scripts that were really excellent. One of them was for a one-year show, which was also something that I was interested in like, “Oh, I could do that. One season, that sounds perfect.” And the other one was this, and the truth is, it was the combination of the quality of the script and then talking with [creator] Sarah [Treem] about what she saw the show being, where she saw the character inside of the tapestry of the show, that brought me back into it.

TVLINE | Something like Fringe is a huge commitment because it’s a sci-fi show. Those are time-consuming. Were you daunted at the idea of doing TV again? Or was a relationship drama more easy?
It’s more satisfying on a day-to-day basis, because you’re doing what actors love to do: work out interpersonal stuff. So it’s certainly easier on that part, because there’s more meat to every day’s work. The thing that I learned last time around is that I don’t know if it’s possible — or I’ve never figured out how — to do 22 episodes at a level of quality that you can really be proud of and still have anything that resembles a life outside of the show and not feel like a bag of ground bones by the end of a season. So I really didn’t want to go back and do that again…

This isn’t Cole’s show. I’m not at the center of this show, which is also, frankly, quite attractive to me after having been at the center of [Fringe and Dawson’s Creek]. The workload is significantly different, and we only do 10 episodes a year. Previous to this, the most enjoyable experiences that I’d ever had on a TV show were the first year of Dawson’s Creek, which was only 13 episodes, and the last year of Fringe, which was only 13 episodes. It just seems, to me, like a more achievable amount of work to do, where you can still be on top of it rather than just reacting or just doing the best you can to keep your head above water, to actually still be totally engaged in the process and doing work that you’re proud of. 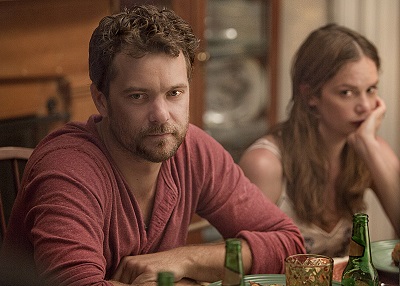 TVLINE | What was it about the subject matter of The Affair that appealed to you?
What appealed to me was not actually the subject matter, per se. I thought that the humans inside of the subject were very real and fleshed out in interesting ways. As happens a lot inside of a relationship, I tell a story that I think we both agree upon, and my version of it and your version of it are very, very different. And I thought that that was a really smart way of examining how we all live inside of our own narratives. I guess that’s the actor in me. We all have our personal attachment to our version of the truth. And frankly, I’m amazed, and I’m sure that [longtime girlfriend] Diane [Kruger’s] amazed, sometimes you can literally be talking about the same thing, it happened five minutes ago, and you have totally different takes on it. So I thought that it allowed for an interesting examination of people, which is the fun of being an actor.

TVLINE | The play of perspectives is really interesting and made me want to go back and rewatch the pilot as soon as I finished it.
Excellent. I certainly know that when I read the script the first time — and I don’t know if this is chauvinism or just bias —  but when I got to the beginning of the second act where she tells her side, my brain just rejected it. I actually had to go back into the earlier portion of the pilot because I was like, “I must be misremembering, or else, why is she lying?” [Laughs] Which I think is exactly what Sarah wants us to do, to make an association, to have our heroes inside of the show and then constantly be challenged which side or which version of the story is more interesting.

TVLINE | Did you go to Sarah and ask her, “What really went down? Can you please clarify? Whose version of events is true?”
Neither is true, and both are true. Each one is the sincere recollection of the people telling their story. It just so happens that people can sincerely believe their version of the truth, and it can be incorrect.

TVLINE | At some point, are we going to get the definitive version?
I have to punt on that question. [Laughs]

TVLINE | Are we going to get more of Cole’s perspective?
For the first season, we stay definitely inside of Alison and Noah’s perspective. There’s been some talk. I honestly actually think the show is better staying inside of those two perspectives. Already keeping two narratives in your mind is a lot, and if you add too many extra voices, maybe it dilutes the show a little bit. So maybe if some piece of the story absolutely has to be told from somebody else’s perspective, then we would go into that perspective, I’m sure. But my opinion is I think we should stay where we are right now. There’s plenty of opportunity to tell everybody’s story inside those perspectives.

TVLINE | For those who haven’t seen the pilot yet, what kind of a guy is Cole?
I would say Cole is a hard-headed man dealing poorly with tragedy. He’s not a modern man who’s capable of talking about his emotions and wearing his heart on his sleeve. His conception of what it means to be a man and to be the firstborn son and to be the leader of a family is that it’s his job to take the punches and keep on rolling. And I don’t think he sees the violence that that is to his wife, who’s clearly suffering and needs someplace to put all of this emotion. He certainly still loves her, and I think Alison still loves Cole after a certain fashion. But they’re just incapable of moving on from this thing.

TVLINE | He’s a little bit of a harder, darker character than maybe people are used to seeing you play.
The introduction is… Well, that’s not true. This is a weird thing to say: I have raped one other person on screen before. It’s in my early career when I was doing snuff films. [Laughs] No, it was a movie many, many, many years ago. But yeah, certainly, if we’re talking about television, a narrative like Fringe has its heroes and its villains. A difficulty of working on network television is that there’s a real resistance from the executive side to allow the heroes to be anything other than heroic. So that character of [Peter] was always in that bin.

On Dawson’s, to a degree, actually, you saw these kids go through their growing pains. They all did some bad things to each other, but essentially, they were all decent people. And I think Cole is a decent person. He’s the opposite of any of the Dawson’s characters because he can’t talk about it, whereas all the kids on Dawson’s, that’s all they could do was just talk and talk and talk and talk and talk. I just don’t think he has the emotional capability to or, really, the desire to get these things off his chest.

TVLINE | In a small town like Montauk, it’s very hard to keep secrets. How long until Cole starts to become aware?
Exactly. That’s part of the pressure that I hope that the audience gets: You really are in a small town, and every moment that [Alison and Noah are] together is essentially inviting disaster. You cannot hide in a place like that. 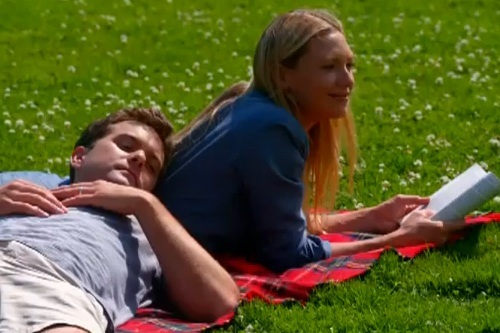 TVLINE | Do you have any lingering Fringe questions about unresolved storylines?
No. I know not everybody did because you can’t please everybody, but I actually really thought that [executive producer] Joel [Wyman] wrapped the story up in a really good way. I’m happy that we got to come back for that last season so that we had the chance to finish the story, because that would have just sucked to have to leave it open-ended at the end of all that. There’s such a temptation to try and do something either shocking for shocking’s sake or overly maudlin because I don’t know why. I thought that was a really elegant, joyful ending to the show. I thought it was really appropriate.

TVLINE | I was re-watching the scene where Georgina Haig’s character finally admits that…
That she’s my daughter? She’s good, Georgina. She’s very good. Yeah, she’s going to be the princess [Elsa] from Frozen [on Once Upon a Time]. It’s crazy.

TVLINE | Your daughter’s grown up good.
Yeah, exactly. I raised a princess!