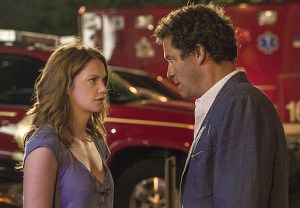 Showtime this Sunday at 10/9c invites you to lay witness to The Affair that ignites between an aspiring novelist and a Hamptons waitress, each uniquely unhappy in their respective marriages.

And as an added wrinkle, there are flash-forwards in which some of the involved parties are being individually questioned by the police, for reasons unknown.

Suggesting how The Affair might excel where Betrayal fell short, Wilson says, “What I was attracted to was the conceit of this show, in telling the story from two points of view. It keeps the audience guessing, 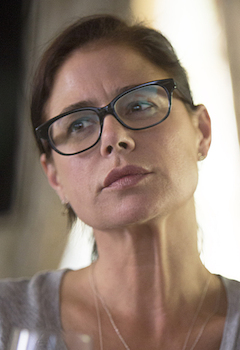 it keeps questions unanswered until further down the line.”

Tierney — the only of the four primaries actually familiar with ABC’s poorly received drama — concurs, saying, “I don’t think that show had a device like [our dual narrative],” while Jackson can only surmise, “Since the name is Betrayal, maybe they’ve made their moral judgement for you!” In The Affair, meanwhile, “We try as much as possible to not judge the characters, and deal with the repercussions of the choices they make,” he says. “Hopefully, since the characters are struggling with the same moral issues, it will allow the audience to feel more invested.”

Indeed, marital infidelity is “a hot subject,” West affirms, “and everyone’s qualified to have an opinion. And I think if this works, it will be because people see their own lives in it, things they may have done or thought.”

Because each episode has two halves — one offering Noah’s perspective, followed by Alison’s — each member of the cast to varying degrees plays two different characters. For example, Alison’s recollection of a pivotal moment in the pilot presents her husband as quite a brute (“There’s a real threat of violence,” Jackson notes), while Noah’s interpretation of Cole in that instant is comparatively inconclusive.

“That was a big reason why I was intrigued with the script,” Tierney says. “My character is quite different in the two viewpoints,” depicted in one as “much more of a rich, sort of snobby, intimidating, very cold person.”

For West, juggling the slightly different Noahs was a task, if only because from Alison’s point of view, he isn’t the smoothest player. “When it would come out that your character did something particularly stupid or unpleasant or unlikable, I’d go, ‘He can’t do that!'” the actor relates with a laugh. “But then you remember, it’s not your point of view. 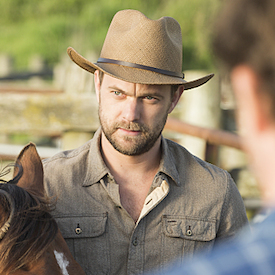 So that was something to get your head around.”

The Affair, as comes with its very title, doesn’t shy away from sex scenes — yet unlike your typical Hollywood production, for screen big or small, it removes much of the gloss. Here, Jackson releases an uproarious riff, detailing love scene tropes such as “gauzy light, and music, and candles, and it’s clearly been the most amazing f–k she’s ever had in her life, because the makeup suddenly fell back onto her face and her hair is done and she’s glowing….” And yet the woman will then rise from bed, demurely wrapped in a sheet. “It takes you right out of the scene,” he observes.

Says West, “You read a lot of scripts where they have ‘mind-blowing sex,’ the very first time, and what’s good about this [series] is that the first time is a bit of a disaster. But I like that. Because it often is. The first time is awkward, and then the sex gets better.

“I wish we had taken that a bit further, actually,” he adds, admitting: “I’ve had a lot of experience in that!”

Will you give Showtime’s The Affair a look-see?