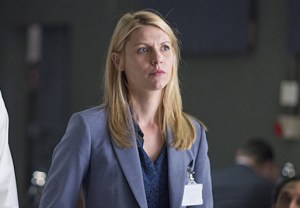 What does Homeland look like (mostly) minus Nicholas Brody?

The Showtime drama answered that question with Sunday night’s double-episode Season 4 premiere, which found Carrie serving as Station Chief in Kabul after trading away her cushy Istanbul gig for one that disallows dependents — carrot-topped cuties included.

But more on poor Frannie in a bit.

RED WEDDING
The season opens with a literal bang, as Carrie oversees a strike on a Pakistani farmhouse, inside which is No. 4 baddie Haissam Haqqani. The intel came from a usually reliable source of Station Chief Sandy Bachman’s, but time doesn’t allow for due diligence in confirming. “Drone Queen” Carrie gives the go-ahead on the bombing, which it later is realized took out not just their target but scores of the civilian attendees at a wedding. One of the few survivors, a med student named Aayan (Life of Pi‘s Suraj Sharma), captured iPhone video of the tragically interrupted revelry, which his roomie Rajeem sneaks onto the Internet, initiating an uproar.

Carrie immediately catches flak from all corners — including increasingly disenfranchised CIA colleague Peter Quinn, who’s disturbed by Carrie’s claims of “bulletproof” reasoning; CIA boss Lockhart, who orders her and Sandy to immediately spin this travesty best they can; and even the First Lieutenant who piloted the strike, who confronts her at a bar.

Picking Carrie up at the airport, it is Quinn who reveals how she left her Istanbul post for one that would “force” her to leave baby Frannie back in the U.S., in the care of her saint of a sister. Then seeing on the airport TVs that Sandy’s cover has been blown, they scramble to alert and exflitrate their colleague in the middle of town, only to have their vehicles surrounded by an angry mob. Quinn, the poor guy, is prompted to start shooting their way out, but it’s not enough to save Sandy, who gets pulled out of the car to be punished by the mob. Carrie wants to try to retrieve Sandy (“We could have done more to save him!”), but Quinn knows a lost cause when he sees one (“F— you, Carrie!”) and speeds the car away.

WELCOME HOME…?
Episode 2 opens with a perturbed Lockhart (and Bachman’s distraught wife) greeting Carrie and Quinn back in the States. Afterward, Carrie goes to her sister Maggie’s house but does almost everything she can, for naught, to avoid reuniting with her baby. And even when she does, begrudgingly cradling her, it’s 100 percent awkward. Maggie says that their father (who was played by the late James Rebhorn) isn’t pitching in as much as promised, so they have “a lot to talk about.” Quinn meanwhile is getting drunk at his motel’s pool when the Rubenesque manager confronts him about littering. They wind up not just hooking up but grabbing breakfast the next morning, where Quinn winds up opening a (near-lethal) can of whoop-ass on some jerks who were chiding his plus-size friend.

Back in Pakistan, Aayan is, amazingly, feeling some guilt for the CIA station chief’s brutal beating, seeing as his leaked video amplified the unrest. He then packs a bag filled with many vials of something, which he leaves with his girlfriend.

DROWNING HER SORROWS
Carrie asks Lockhart for Sandy’s station chief post but gets shut down in a hurry, seeing as she is being formally recalled to the States, permanently. “Think of it this way — you’ll get to spend time with your kid,” which is obviously not a selling point for Carrie. That said, Carrie follows through on a promise to watch Frannie the next day, so she plops the car seat into the front row passenger seat (at least it was facing backward?) and takes the wee one for a tour of her dead baby daddy’s house. “I was arrested on that lawn” is among the warm, fuzzy anecdotes Carrie shares. Then revealing more than a bit of her shattered psyche, she notes, “You were the last thing he was happy about…. I tried to feel that too… but with his being gone, I can’t remember why I had you.”

That tees up the most harrowing mother/daughter moment, when in the middle of bathing — and upon accidentally letting slip — Frannie, Carrie lowers the six-month-old ever lower into the water, to the point that she is barely submerged. But Carrie thankfully snaps out of it and scoops her daughter up, cradling her and they both cry.

On a, um, lighter note, Dar Adal informs Saul — who has been phoning it in if not nearly tanking it in his new job for a private military contractor — that Carrie has been recalled, and that the wedding massacre may pave the way for a changing of the guard at the CIA. “Lockhart is vulnerable,” Dar notes. “There’s blood in the water.”

Carrie, after bailing Quinn out of jail, presses him for possible leads on Sandy’s suddenly unreliable source. This points her at a guy named Harris, a former case officer who himself got unceremoniously “recalled” — apparently for wanting to reveal that Sandy was trading secrets, with Lockhart’s knowledge, to his source in trade for good intel and big wins/kills. Confronting Lockhart at Sandy’s funeral, Carrie uses this damning info to secure the Islamabad post she covets, so that she can suss out the snitch. And while Saul promises his PMC services as needed abroad, Quinn insists he cannot go along.

As the second hour closes, Carrie breaks the news to Maggie, who suspects full well that her sister manipulated the situation to get away from Frannie… Quinn gets a sweet note from his motel manager squeeze… and Aayan is sternly confronted in his dorm room by men who warn him to do no more interviews, no more videos — or else.