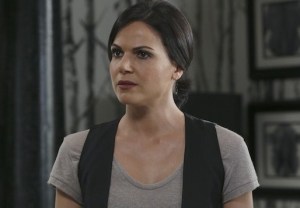 This past Sunday on ABC’s Once Upon a Time, Emma, Hook and Charming were stymied by an ice wall conjured by Frozen‘s Queen Elsa — yet no problem-melting fireballs from Regina were to be had.

PHOTOS Once Upon a Time‘s Emma Nabs The Knave, Sadness for Regina

Rather, Storybrooke’s resident Evil Queen (played by Lana Parrilla) was holed up in her home, presumably plotting to track down the author of son Henry’s storybook and strong-arm her own happy ending, with Robin Hood. (Further, as revealed in a deleted scene, Madam Mayor outright shrugged off responsibility for tackling the town’s latest woes, instead putting Mary Margaret in charge.)

As such, one could understand if some TVLine readers had expressed concern that a major character was being “frozen out” of Season 4A’s buzzy Frozen storyline.

RELATED Once Upon a Time Season 4, Episode 2 Recap: Icebreaker

When we raised that very issue with Once creators Adam Horowitz and Eddy Kitsis at the series’ recent premiere event, Horowitz was quick to correct, “‘The Frozen story’ is not the way we look at that. It’s ‘the Frozen characters coming into Once Upon a Time,’ and when they do, how it affects everybody.

“An important thing for fans to know is that while we are telling this arc with the Frozen characters, we are in no way leaving the arcs of characters like Regina aside,” he stressed. “We still want to explore them.”

To that end, Kitsis enthused that including and beyond Robin Hood and the hoped-for storybook rewrite, “The plan we have for Regina this season is one of my favorites…. Although she is a part of the Frozen storyline [and] is affected by it, she also has a few arcs of her own that we’re introducing at the beginning of this season, so I think fans should wait and see what that is.”