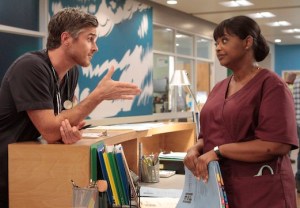 Octavia Spencer’s Nurse Jackson may have been labeled “Scary Bitch” in promotional posters for Fox’s Red Band Society but upcoming episodes will unearth a surprising backstory — and a lot more layers — to the character, the Oscar-winning actress reveals.

Asked about a cryptic comment by Nurse Kenji (Wilson Cruz) in Episode 3 that Jackson had given up “a life most people only dream of” in favor of working at Ocean Park Hospital, Spencer jokes we’ll discover her character was a hand model. In all seriousness, though, “Nurse Jackson is everything you think she is, and then a lot of things you don’t,” Spencer adds. “We dropped some breadcrumbs in the pilot and the last couple episodes. And now, we’re actually filming a big Nurse Jackson reveal [in] Episode 7.”

Before that revelation, however, there’s a homecoming dance to survive in tonight’s installment (9/8c on Fox) — an event that occurs at the school of Jackson’s nemesis Kara (Zoe Levin). Interestingly, though, it won’t be the hellion cheerleader clashing with Jackson this time around, but rather, Jordi’s flighty mom (Catalina Sandino Moreno) “who gets under Jackson’s skin.”

“True friendships are revealed — and not just with the kids — in the midst of this homecoming,” the actress previews. “Emma gets to go to her first dance, and it’s Kara’s homecoming, so there’ll be sparks flying there. Are they both out for Leo’s heart?”

Spencer adds that while she “definitely wanted some assurances” from producers that Jackson’s backstory would be explored in depth beyond the pilot, she never felt that the series itself “had to be all about me. I love ensemble pieces. And I love the fact that we get to focus on these kids. Every character has his or her episode, where their storyline comes to the foreground.”

Nurse Jackson, for her part, “is used to people making grand assumptions about her — especially privileged little kids who don’t know about struggle. But I don’t think that bothers her at all,” reasons Spencer. “She doesn’t bring her private life to work, although we’re learning that a few people at the hospital, like Kenji, know about her. He’s already opened that door — the hospital is a huge part of her life, but there’s a whole different part that we’re going to unveil.”

Might that involve Griffin Dunne’s flirtatious hypochondriac (and Ocean Park benefactor/resident) Ruben? “There’s definitely something there,” Spencer teases. “But it could be a mislead or a red herring. You don’t know. I can only tell you based on what I’ve shot. That’s the fun of it, reading that script and saying, ‘Oh my God, we’re going there!’ Or sometimes the heartbreak of ‘Oh my God, we’re going there.'”

Speaking of ‘Oh my God’ moments, the Nurse Jackson character was unflatteringly described as “a more predictable, pre-Rhimesian role” in a recent piece by New York Times TV critic Alessandra Stanley about Shonda Rhimes’ new series How to Get Away With Murder. The poorly researched article — filled with groan-inducing bits like describing Rhimes as an “angry black woman” and calling series star Viola Davis as “older, darker-skinned and less classically beautiful” than Kerry Washington — definitely didn’t escape Spencer’s radar.

“I’ve never seen so many actresses named in a piece that was supposed to be about another actress’s show,” says Spencer. “My hat’s off to Shonda Rhimes. Because of her, there are a lot more strong, interesting black female characters — but not just black characters. Grey’s Anatomy is a very culturally diverse show. And I liken that kind of diversity to Red Band Society — where there are so many different types of people working in this hospital.

“I don’t necessarily let all that kind of noise in, to be honest you, but I was just really hurt for my friend [and The Help co-star] Viola and some of the things that were said about her,” Spencer continues. “But I don’t really pay attention to that stuff when it’s directed at me, because that is a huge assumption. And that’s what I love about Nurse Jackson: You think that she’s one way, and she is that way, but there’s a whole other side of her. No person is just one particular emotion. Angry or not. It’s a human emotion. But you can’t walk around being angry all the time. What a dull person you’d have to be!”