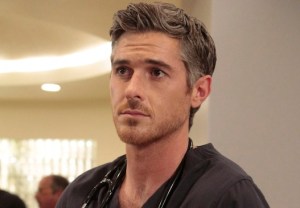 Dave Annable would like you to know that any resemblance between his Red Band Society character character, Dr. Adam McAndrew, and ER‘s Dr. Doug Ross are entirely coincidental.

“You peruse the Internet and see things like, ‘How much makeup is in his hair to get that gray? Stop trying to make him look like George Clooney,'” Annable says with a laugh. “I spend 10 seconds in hair and 10 seconds in makeup. I couldn’t look any more like me!”

The actor, who credits the early greying of his locks to a combination of genetics and “marrying a Cuban four years ago,” adds that, “All of the kids [in the cast] have me in their phones as Salt-N-Pepa — but I think I’m starting to become a little more salt.”

Like Dr. Ross, however, Dr. McAndrew’s love life is about to get significantly more complicated, starting with tonight’s episode (9/8c on Fox).

Last week’s installment ended with the foxy doc sidling up to a sexy stranger at a bar after work — and Wednesday’s hour, “Liar Liar Pants on Fire,” makes it clear the encounter ended with a thorough, mutual physical examination. The fact that Eva is played by Oscar-nominated Catalina Sandino Moreno (Maria Full of Grace, The Bridge) is a pretty good tip-off that said hookup won’t be a one-night affair — but not necessarily because either party is looking for a relationship.

It turns out that Eva has a prior connection to McAndrew’s new cancer patient Jordi – who fled Mexico and sought out McAndrew at Ocean Park Hospital because his abuela didn’t believe in modern medicine.

“We’re starting to see a little more of my character’s personal life,” says Annable, who stays tight-lipped when pressed for more intel about Eva’s backstory. “We see where he lives and in a sense, how he deals with the hardships of working in the pediatric ward, where every kid he encounters is sick.”

At the same time, Annable admits, the show’s writers seem to be “planting some seeds” of romance between McAndrew and perky Nurse Brittany (Rebecca Rittenhouse). “She’s a very attractive girl, and at some point, those extra long looks between them might end up going somewhere,” the actor teases, adding that Brittany “blurs some lines” early in this week’s episode by observing McAndrew is wearing the blue tie that he only puts on days after he has sex. (!)

In doing research for the role, Annable found that “the hours you have to put in, the dedication to your work as a young doctor — it makes relationships extremely challenging.” That idea will be further explored later in the season, he adds, when Mandy Moore joins the cast as McAndrew’s ex-fiancée.

Of course, McAndrew’s other major relationship on the show — with the steely Nurse Jackson (Oscar winner Octavia Spencer) — finds the duo playing surrogate mom and dad to their underage patients. “It’s a hard line to balance, being a medical professional and being these authoritative figures, but also being caring people and stepping in for these roles of ‘Mom’ and ‘Pop,'” Annable explains. “You can see that Jordi and McAndrew have a special relationship, and Jordi is kind of clinging on to him. But at the same time, I even have a line, ‘I’m not your family.’ My real goal is to help him and to get him out of the hospital as fast as I can.”

Annable insists that regardless of how his character’s story arcs play out, Red Band Society is a show that’s far more about life than death. “If you’re on the fence about watching, just try the pilot,” he implores. “You’ll be inspired and uplifted — and maybe have a happy, cathartic cry.”