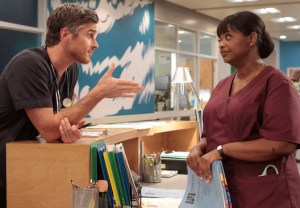 OK, OK, maybe Red Band Society doesn’t truly require America’s most famous lesbian couple playing heightened versions of themselves — not quite yet, anyway — but I sure hope we’ll be seeing more of Sara (Andrea Parker) and Daniella (Tricia O’Kelley), the power couple responsible for raising delectably bitchy cheerleader Kara (while also sharing a personal trainer with the aforementioned daytime talk-show host and her Arrested Development-starring wife).

Kara’s interactions this week with her biological mother and erstwhile nanny-turned-stepmom not only amped-up the show’s laughs-per-minute ratio (“Listen, girlfriend…”), but also helped drive the ailing teenager into an unlikely alliance with anorexic hospital-mate Emma — helping to reduce the “meow” factor of having the show’s two female patients perpetually at odds.

But hey, let’s not keep flipping through old National Geographics in the waiting room. It’s time to get down to the business of recapping the action in “Sole Searching” — and raising key questions about what it all means:

JORDI, LEO AND DASH | Hot Doc’s surgery to amputate Jordi’s leg doesn’t go as planned when he discovers the cancer has spread to the kid’s soft tissue. Hot Doc, of course, manages to break the news to Leo and Jordi — but only the good, “We saved your leg!” half. Leo, who’d been creepily (albeit somewhat understandably) anticipating having a friend who’d understand the perils of one-legged life, goes into tantrum mode, then (along with Dash) tries to drown his troubles with alcohol at a nearby frat-house party.

When Leo gets thisclose to some bah-chicka-wah-waah with a comely co-ed, however, he freaks out — knowing she’s about to see the prosthetic leg he’s so carefully hidden. He calls her a slut, winds up collapsing in pain on a bedroom floor, and has to wait for Dash (whom he’d also screamed at) and irksomely naive Nurse Brittany to come to the rescue. It’s Nurse Jackson, though, who provides the real medicine, giving him a tough-love pep talk — “You can’t run away from your life. It’s yours and it’s precious. You just have to claim it.” — prompting the soulful-eyed teen to finally do the right thing: Sit at Jordi’s bedside and be the Red Band Society leader he’s supposed to be.

Key questions: Are we all feeling a little less bullish about Hot Doc’s qualifications after failing to give his patient the full scoop on his cancer straight away (and for telling his very recent pal Leo — a non-relative — about it first)? Does Dash need something more to do than get his sidekick on? (Heck, nobody even discusses his illness — let alone his interests, his family or his love life!) How many minutes in the Naughty Corner should Leo receive for behaving so boorishly toward Jordi? And how did we see Hot Doc making a play for a Hot Stranger at a martini bar — without a shirtless, sexytimes payoff? (#MissedOpportunity)

KARA AND EMMA (AND KARA’S MOMS) | So, as mentioned previously, Kara’s moms arrive at Ocean Park — they’d been vacationing in Cabo — and become so pre-occupied with planning an awareness-raising event to get Kara higher on the transplant list that they pretty much forget to ask the hospitalized teen how she’s coping with her sudden and scary diagnosis. When Kara seeks asylum in Emma’s room, her frenemy demands to know why, and Kara finally has to admit that her moms only show interest when it benefits them, not her.

Emma magnanimously pays a visit to Sara and Daniella, suggesting they try “a different kind of support” for their kid, but Sara — hilariously tone-deaf, I have to say — winds up telling Kara she should try to be more like her chapeau-sporting buddy with an eating disorder because the relationship “might just be what you need to appeal to the transplant board.” Yikes! Eventually, it’s Daniella who reaches out to Kara — mending their bruised relationship with a Winnie the Pooh quote and the intel that Sara is truly scared, too. And it all ends in a group hug — plus Kara’s revelation that she’s never watched Ellen! “For the record,” she adds, “I’m familiar with Portia’s work.” Whew. All is forgiven.

Key questions: Who had the funnier barb? Emma’s “if you’re looking for children’s souls, try the NICU”? Or Kara’s “I’m sorry we didn’t all grow up on a very special episode of 7th Heaven“? Do you feel like Kara’s relationship with her moms gives you a better understanding of her cantankerousness? Or are you worried the writers will soften her to the point where she’s just not as funny? And with the power lesbians in the mix, do you think Kara’s other set of parents from the pilot will never be seen again? Also, how scary is Emma actually trying out Kara’s salted ice-cubes diet? (Thank goodness Nurse Jackson didn’t buy the phony weigh-in that Nurse Brittany blithely bought!)

With those questions out there, what did you think of Episode 2 of Red Band Society? Will you be back for No. 3? Sound off in the comments!