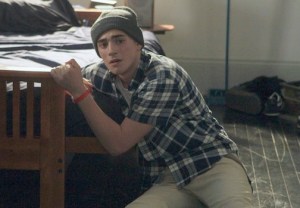 Red Band Society takes a vacation from Ocean Park Hospital — with a misbegotten trip to a frat-house kegger — when the charming freshman drama airs its second episode tonight (9/8c, Fox).

“Leo steps over the line. He goes way past the line, in fact, in terms of his physical ability,” previews series star Charlie Rowe, whose character and buddy Dash (played by The X Factor‘s Astro) sneak off the medical campus to hang with some college kids. “He’s thinking, ‘I’ll be fine.’ But a few things go wrong, and he realizes he doesn’t actually have the physical power to do this.”

Of course, it doesn’t help that Leo’s journey is fueled by a jealous tantrum after finding out hospital newcomer Jordi — who, like Leo, is also battling cancer — didn’t wind up getting his leg amputated during the surgery that ended last week’s pilot episode.

“I completely get it. I understand it,” Rowe says of Leo’s envy and his struggle to accept his new prosthetic leg (plus the painful physical therapy that comes with it). “Leo absolutely wants to be part of a group. He used to be part of a group at school and now, in the hospital, he can see that group is drifting further away.” Having a fellow amputee as part of the titular “red band society,” though, would’ve been “a huge deal,” Rowe reasons. Still, Leo’s excursion turns out to have some perks — including a steamy encounter with a comely young coed. “Some ladies like the bald look,” jokes Rowe, who explains shooting that particular scene turned out to be fairly awkward. “It was the one day that my parents had come to visit set, so it was a little embarrassing. That was the main thing on my mind — ‘I hope my mom’s not watching.'”

Speaking of parents, there hasn’t really been a mention of Leo’s mom and dad yet — which seems a bit peculiar considering their son is battling a potentially terminal illness. “I was told that Leo’s parents exist, but they are not around often. They’re busy. They try to see Leo every two or three weeks,” Rowe explains. “I hope we get to meet them. But he’s very much alone at the moment, and that’s the worst.”

In the interim, Rowe adds, Octavia Spencer’s steely Nurse Jackson is serving as Leo’s mother figure. “Although she gets angry at him, she means a great deal to him,” he says. “He likes that anger, he likes that there’s someone looking out for him and cares for him.”

Are you digging Red Band Society thus far? Will you be tuning in to Episode 2? Sound off in the comments!