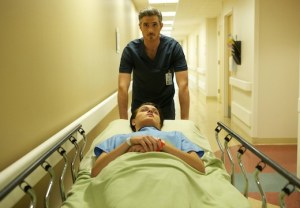 It takes a gutsy TV pilot to build to a closing scene of an adorable teenage boy getting his leg amputated — and then to sell it as a moment that’s as soaring as it is heartbreaking.

But Red Band Society — a freshman drama that initially looks like over-boiled broccoli but tastes like delicious pizza — has concocted a recipe that, while not entirely perfect, manages to cut its saccharine undertones with acidic punchlines and a complex, meditative view of mortality that’s worth the price of the two or three Kleenex required to get to the closing credits.

The setup: Deliciously bitchy cheerleader Kara (a fantastic Zoe Levin) and orphaned heartthrob Jordi arrive at a children’s hospital ward — one via ambulance after collapsing during practice, the other scoring an audience with an unspeakably hot, in-demand surgeon (Brothers & Sisters‘ Dave Annable) in the hopes of convincing him to take him on as a patient. Jordi, whose mom died a year ago and was sent back to Mexico in the wake of his loss, now has cancer in his leg — and he wants the best possible doctor on board for his amputation. Kara, whose possible lesbian-romance side plot is too fun/funny/perfect not to score serious followup, learns that her heart is failing — and that her casual drug use puts her at the bottom of the transplant list.

Kara and Jordi meet up with the other residents of the ridiculously well-furnished ward (damn those kids’ rooms are nice!): Leo, who’s also lost a leg to cancer and possesses the most piercing eyes on the planet (or at least on network television); his erstwhile girlfriend Emma, who’s battling anorexia; party-loving Dash (The X Factor‘s Astro); and coma patient Charlie, who narrates the series from his omniscient’s-eye-view of the ward (while craving pizza and a clean conscience for his dad — played by American Pie‘s Thomas Ian Nichols).

Overseeing the comings and goings of these scrappy kids is Nurse Jackson, a role that Oscar winner Octavia Spencer imbues with gruff humor and a slight air of mystery — as if she’s suffered some deep, psychic wound that we’ll slowly learn about as the season unfolds.

Not every aspect of the pilot works: Charlie’s ability to communicate folks who are unconscious is a little too twee; Griffin Dunne’s rich hypochondriac (who gets to live in the hospital in exchange for donations) pushes the outer edges of plausibility — especially since he spends half his time hanging out with sick teenage boys; and the adult characters don’t feel fully formed by the end of the hour.

But as the pilot builds to a beer-fuelded rooftop party to say goodbye to Jordi’s leg, it’s hard not to get swept up in the percolating romances, the budding friendships and the surprising kinship of the teenage cast. The beauty of Red Band Society is that it imagines its core characters not as “sick kids” — but simply as kids who happen to be sick.

When Jordi makes his final sprint through the hospital — as much to deliver his “red band” to Emma as to feel the thunder of a good sprint one final time — it’s hard not to wonder what’ll come next for these kids and their caregivers.

What did you think of the Red Band Society pilot? Which characters and performances drew you in, and which ones left you a little skeptical? Take our poll below, then sound off in the comments!