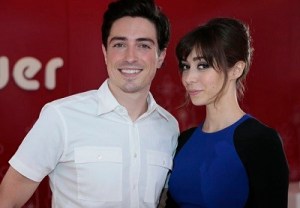 A to Z‘s hopeful romantic Andrew has gotten the girl, but will he keep her?

After locking lips at the end of the pilot, Andrew and Zelda must now deal with a morning after of sorts as Episode 2 (airing this Thursday at 9:30/8:30c on NBC) picks up the very next day. And there’s a bit of a hiccup.

“He was supposed to go out on a date with someone else,” star Cristin Milioti teases.

RELATED A to Z Star Cristin Milioti Talks Hitting the Rom-Com Jackpot (Again) — Plus: Why HIMYM‘s Ending Was ‘Brave’

Also of note: Viewers know there’s an end date — about eight months from now — to the pair’s courtship. So, during a trip to the show’s set, TVLine quizzed leading man Ben Feldman about why the couple works and why they might break up.

The actor also reveals which rom-coms the show hopes to emulate — Penny Marshall and Nick Hornby fans, listen up — and why he (probably) won’t sing opposite Milioti.

TVLINE | On Drop Dead Diva, there was a lot of romantic comedy, especially with your character, Fred. In some weird ways, there was even comedic stuff with Ginsberg on Mad Men.
There was, kind of. He went out on a romantic note, in a really messed-up way.

TVLINE | Was this a natural evolution for you? Were you looking to do a half-hour sitcom?
You know what’s funny is this feels more like a return. It’s a left turn that I didn’t see coming. I started in super sitcom-y, multi-camera [shows]. Fran Drescher was my mom for two years [on Living With Fran], and then I moved into that area where Drop Dead Diva was. And then Mad Men was like crazy, weird, hourlong drama – strange and off-putting. That’s what my dream was. So I’m actually surprised that I’m back in the half-hour romance world.

TVLINE | How would you say Andrew compares to Drop Dead Diva‘s Fred, who was also extremely likable?
There are some similarities between the two. I think Fred was massively naïve, just by nature of being, essentially, an alien. [Laughs]. [He was] an angel who knew nothing about humanity or anything like that. So Fred was more of an anthropologist, understanding human nature, and this guy is a little more confident. Andrew has been around and can handle himself a little bit more. He’s more of a dude.

TVLINE | What are three things you think viewers should know about Andrew to understand who he is?
I think his heart rules everything. He believes in love, and he makes that a priority. He’s optimistic. He’s the kind of person that I would want to hang out with, because I would imagine it’s really hard to be in a bad mood around him. He believes in fate and happiness and love and relationships.

TVLINE | There’s a question mark about what happens after Andrew and Zelda have been together for a while. Have you pressed the producers about that? Is that something you’re wondering about?
Yeah, to a degree. Cristin and I like the idea of learning in real time. We’ll know not that long before you guys know what happens. [Laughs] I like that. It’s fun to learn as we go along, and then we’re not playing the ending. If they get married or whatever, we may act different if we’re playing the future. So, no, we don’t want to know. We know a little bit. They don’t tell us much… The relationship, as we know it, will change in some drastic way, and your guess is as good as mine. 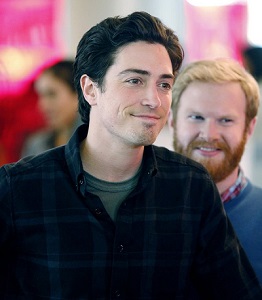 TVLINE | Well, it could end badly, or they could get engaged. So what do you think makes them right for each other, and what makes them wrong for each other?
Well, I’ll start with wrong, because that’s usually where my mind goes anyway when I’m thinking about relationships. They’re very different people, and I think they approach relationships in a very different way. People always say opposites attract, but I think opposites can attract as long as you’re somewhat on the same page in the way that you view what it is to be together… That said, I think all of the things that separate them compliment each other, and I think they are a good pair because they’re either side of the yin and the yang. So it really is a crap shoot. It could go either way with them.

TVLINE | He wins her over at the end of the pilot. What does Episode 2 look like for them?
What’s cool about the pilot is, so many shows are, “Will they? Won’t they? Are they going to get together?” We get that out of the way in one episode, because it’s not what the show is about. The show is about the relationship, and the show doesn’t exist before the relationship other than, obviously, in flashbacks. [Laughs]. So the second episode is, “Alright. Great. Good. Got that out of the way. They’re together. Now let’s watch what happens,” and it literally starts, I think, the very next morning.

TVLINE | A to Z will appeal to fans of which other romantic comedies?
I think people who miss those old Penny Marshall [movies], those really warm, happy, fun relationships. Even Nick Hornby fans maybe. Steve Pink, who actually wrote [the screenplay for the movie adaptation of Hornby’s] High Fidelity, directs our third episode. There’s a lot of room for the awesome, hilarious, Seth Rogen-y kind of stuff that’s out there, but there’s not a lot of Meg Ryan anymore. [A to Z is] that sort of old-fashioned sensibility combined with this very current, of-the-moment show with the online presence, both in the story of the show and also in real life. And even the ticking clock aspect of it is something that’s different and new. It’s kind of a perfect combination of both old and new.

TVLINE | I know from watching Drop Dead Diva that you can sing. [Watch Feldman singing “Baby I Need Your Loving.”]
[Laughs]

TVLINE | And obviously, Cristin can sing.
Cristin can actually sing. I was forced to sing.

TVLINE | You can sing! You were good.
I think [executive producers] Will [McCormack] and Rashida [Jones] are writing an episode that involves singing. I promise you, you’ll see Cristin singing. There’s no way [she won’t]. That’s a majorly wasted resource. Girl’s been both Tony- and Grammy-nominated. I don’t know that America needs to see me sing that much.

TVLINE | I think you’re being too hard on yourself.
It also terrifies me. I had to go to a studio and sing that over and over again, though. Cristin could just show up with the flu…

TVLINE | With a ukulele.
And sing right away, and it would blow everybody’s minds. So, screw her.