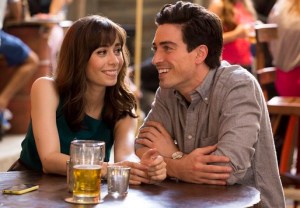 How I Met Your Mother‘s titular mama Cristin Milioti is finally getting her happy ending — or is she?

On NBC’s new rom-com A to Z (premiering Thursday at 9:30/8:30c), Milioti stars as the rational Zelda, who gets swept away by Andrew, a hopeful romantic played by Ben Feldman (Mad Men). But, as we are informed in the pilot, the pair only dates for eight months, three weeks, five days and one hour.

So what happens after the courtship? (Hopefully nothing quite as sad as the actress’ fate on How I Met Your Mother — although, as you’ll see, Milioti usually prefers darker outcomes.)

During TVLine’s visit to the A to Z set, the actress opened up about taking on another romantic comedy, singing as part of her new gig and striking the on-screen chemistry jackpot yet again. Plus, she explains why HIMYM‘s ending was “brave,” despite the many tears she shed over it.

TVLINE | Was there any apprehension or concern about doing another high-concept romantic comedy right after How I Met Your Mother?
I never thought about it until we started shooting. Then a couple people were like, “Oh, it’s a lot like How I Met Your Mother,” and I was like, “It is?” Yes, it is because it’s about destiny, but I feel like it’s so different. I knew that I wanted to do another comedy. I really enjoy working in television because you can sit with a character for a really long time. I love film, too, but I like that you can go on some much longer, more personal journey because you see this person every week, and I knew I wanted to do a comedy because I loved it.

TVLINE | Did you find yourself just really wanting to tap into those skills again once it was over?
How I Met Your Mother was so much fun. There was never a day where I was like, “Oh, this again.” In fact, I was devastated when it ended. I would’ve come in every day, 15 hours a day… With films and theater, I’ve done usually more serious roles, which is also very fun, but draining in a way. In comedy, you’re on your toes a lot more, which I also really like. It feels like your brain is doing jumping jacks all the time, especially because we’re pretty loose here. Like, we’ll do one with the lines, and we’ll do one much looser and with improvisation. It’s just so much fun. TVLINE | I didn’t think it was possible to top Tracy and Ted Mosby, but you and Ben Feldman are so terrific together. What was your first impression of him?
I was attached already, and we did a chemistry read for his network test. So we met in a conference room at NBC Universal for 20 minutes before we went in together. We just ran the scenes, and we were both so nervous and so sweaty and then he just knocked it out of the park. It was just instantly there, and I’d read with a lot of guys who were all wonderful, who were so great and so funny and such lovely people, but there was just something there. It’s like you can’t quite put your finger on it. That’s why chemistry is so cool. That’s why casting is so cool. It’s that intangible stuff that makes something work.

TVLINE | There’s a mystery in the show about what happens after the eight months or so that Andrew and Zelda date. It could go badly, it could end, or they could get engaged.
I think I differ greatly on this because I always like things to take a darker turn. I’m like, “Well, they break up.” We don’t know. [Creator] Ben [Queen] won’t tell us. We did some promo thing where it was me, Feldman and Ben Queen in the center, and Ben Queen was like, “What do you guys think happens?” and I was like, “Well, they break up, obviously,” and then Ben Feldman thinks they get married.

TVLINE | You take after your characters.
We do. And it’s the only way we do. I just think it’s very interesting to have them break up and then see how they have to deal with that. But I guess maybe that doesn’t work for comedy, but I think it does.

TVLINE | How does Zelda compare to Tracy? She’s a pretty different character in a lot of ways.
[Laughs] Yeah, super different, which also appealed to me. Tracy was a character that was incredibly open and wore her heart on her sleeve like Ted. Zelda has a lot of walls up and doesn’t even know about some of the walls; she’s the main problem. Andrew would get married tomorrow. The conflict is Zelda, that she won’t go there, that she always finds an excuse to not let go even though it’s what she really, really, really wants… Zelda is much more fearful.

VIDEO How I Met Your Mother Stars Praise Series Finale, Express ‘Relief’ — Plus: Who Learned the Ending Last?

TVLINE | When are we going to get to hear you sing on the show? That has to happen. [Milioti won a Grammy Award and earned a Tony Award nomination for her work in Broadway’s Once.]
I don’t know. [Laughs] I don’t know. I do play an instrument.

TVLINE | Do you want to sing on the show?
Yeah. I asked if I could sing badly. That pitch didn’t go well. I was like, “What if she sings really badly and is tone deaf?” and they were like, “No.” [Laughs]

TVLINE | Is this show as secretive as How I Met Your Mother was?
Hell, no. I think How I Met Your Mother was secretive because that was the last season, and I ended up sitting on that huge reveal… I don’t like giving anything away because I wouldn’t want to know. That’s why you tune in. I would get so confused when people would be like, “What happens to the mother at the end? Is it true? Does she die? What’s going on?” And I’d be like, “Why would you ever want to even know? It’s going to air in two weeks. Just watch it in two weeks. You don’t want to watch it knowing.” TVLINE | Now that you’ve had some distance and time from How I Met Your Mother, what did you think of the finale? Did you like the twist?
[Creators Craig Thomas and Carter Bays] told me at the Christmas party. Craig sat me down and told me [about the twist]. He can tell you: I burst into tears and I was like, “That’s so sad. Why would that happen? He finally found someone. Why would you do that?” through tears. But then what was really great about it is that Craig and Carter made that decision 10 years ago, and that it is so wonderful that that was their vision and they did it and it was true to life. Life throws you enormous curveballs that you are entirely unprepared for, and that’s what that episode was taking the audience through — the emotions of really appreciating every day you have with someone because life happens and it’s so beautiful, but also so hard. That was really brave of them to do that, to stick to their guns about it.