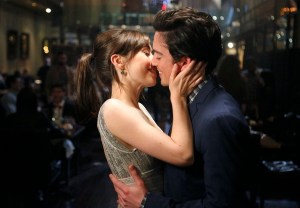 Is A to Z‘s central romance already destined for failure?

Given that the new NBC comedy’s title suggests a beginning and, more importantly, an end, talk at the Television Critics Assoc. summer press tour in Beverly Hills on Sunday turned to the fate of the courtship for Andrew Zelda (played by Mad Men‘s Ben Feldman and How I Met Your Mother‘s Cristin Milioti).

The first season of the show will cover the “eight months, three weeks” and odd number of days that the twosome date (as revealed in the pilot), executive producer Ben Queen revealed. So, do Andrew and Zelda break up at the end of that period? Or does someone die…?

“We’ve played that card,” Milioti quipped, referencing her ill-fated How I Met Your Mother character.

Meanwhile, the show’s letter-per-episode format provides “a good little organizational structure for a season,” not necessarily an finite conclusion when Z is reached, Queen said. “There’s no reason why every season can’t do that and show you one aspect of a couple’s relationship.” (No, the show doesn’t plan to introduce a new pair of lovebirds every year.)

“Some of these episodes are going to cover more than one letter,” Queen explained. “There’s been a trend towards this will-they-or-won’t-they in relationship stuff, which I love. But I was just ready to meet a couple in the first scene of the pilot and follow them.”

Added EP/Parks and Recreation alum Rashida Jones: “There will be an ending in terms of an ending, meaning a change. Relationships change all the time whether it means relationships end, they go to the next level, there’s moving, there’s kids, there’s other people… Our hope is that to put that ticking clock on it will help people to invest in whatever that moment is, whatever that change is.”