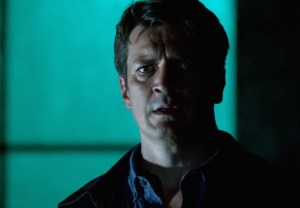 This week on ABC’s Castle, Rick took the lead on the investigation into his months-long disappearance and loss of memory — only to be left with new questions.

Fast-forwarding to the good stuff: After tendering a $250,000 reward for info about his possible whereabouts, Castle meets newlyweds who noticed him in the background of a honeymoon photo, taken outside a Montreal bank. What’s more, Rick in the pic is talking to Not Henry Jenkins (played by Matt Letscher).

Alexis — who was full of all sorts of smart ideas this week, bravo — suggested that the “38” key found in the lining of Castle’s pants is for a safe deposit box in the Montreal bank. And sure enough, it is. Inside the deposit box, they find envelopes addressed by Rick to Beckett, Martha and Alexis, each containing a memory card.

Returning to Kate at the 12th, Castle plays the memory card from her envelope, and it’s a video of him looking a bit distraught, saying, “If you’re seeing this, I’m probably dead…. I never intended to leave you on our wedding day, it wasn’t my choice… Just know that I love you… Always.”

Castle asks Tory to try to ascertain where the video was taken, and her computer program reveals it to be a building in Montreal. With Beckett off solving the Case of the Week, Rick returns to Montreal by his lonesome. And inside the abandoned building, he is met by a gun-toting Not Henry Jenkins.

“You weren’t supposed to come back, ever,” NHJ reminds Castle. “You can’t be doing this, asking questions and offering rewards… or you’re going to find out the truth. And you said you didn’t want to remember.” When Castle contends there “is no way in hell” he made such a request, NHJ proves their bond by sharing his knowledge of an unknown incident from Rick’s childhood, something that happened on a February day in Hollander’s Woods at age 11, and marks the real reason Rick wanted to become a mystery writer. Three weeks prior, Rick confided in NHJ the anecdote for just this purpose, in case he needed proof that a trust was shared between them during his disappearance.

“Some mysteries aren’t meant to be solved,” NHJ warns. “Forget this ever happened. It’s what you wanted.”

Returning home to NYC, Rick, Martha and Alexis bat around some ideas about what he went to such lengths to forget — did he witness something unspeakable? — but ultimately rest their ruminations. Then in bed with Kate, Rick debates the feasibility of moving on with life without ever knowing what happened. The topic turns to marriage, but Kate thinks they need “some distance” from this unsettling life event, during which they can “find solid ground together.” As she makes clear, “I’m not going anywhere,” so they agree to tie the knot during November sweeps. Er, in a month, I mean.

* Working his first crime scene since “returning,” Castle discovers that the “Life’s too short” moral of his story drove Esposito and Lanie back together — to the point that she customizes “sexy,” personalized ring tones on his cell. Speaking of romance: Martha met a man during grief counseling. So if Rick can just “play dead” for a bit, that’d be super!

* Amusing scene where Rick employs Sun Tzu’s The Art of War by distracting an angry Gates with a smooch.

* The Case of the Week was kind of a mess; the motive for murder could be seen coming down Broadway. (On TV these days, it seems that if there’s a warehouse, there’s drug smuggling!) That said, it was good to see The Closer‘s Gina Ravera again. And any theories on who the culprit, “Matt M.”, was named after? (Could have cast him cuter, ahem!)

What did you think of “Montreal” and its few reveals?