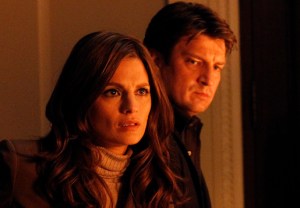 TVLine has learned exclusively that on the heels of a drama-filled opening salvo of Season 7 episodes, ABC’s Castle will lighten things up with an “alternate reality” escapade that poses the provocative question: What if Rick and Kate had never met?

The specifics of what tees up this season’s reality-twisting sixth episode are under wraps, but series regular Jon Huertas, who plays Detective Javier Esposito, says it his favorite installment of the upcoming run.

Seeing as the season opens with the mystery of Rick’s “death” and what really happened to him, uncorking a new piece of mythology along the way, “The first couple [episodes] can’t bring too much comedy,” Huertas tells TVLine. “But this ‘alternate universe’ is classic Castle, where you mix a great procedural crime with comedy.”

Huertas says the hour will imagine “a completely different world” where all of the major characters exist, but in rejiggered ways. “It was a lot of fun, getting into that script and seeing how we might all be a bit different,” he shares. “It’s a really fun episode, and people are really going to enjoy it. It’s one of those episodes where you have to laugh.”

Alternate reality episodes of course are nothing new to TV — ABC’s Grey’s Anatomy itself has employed the narrative device twice, The Big Bang Theory last winter contemplated Sheldon’s non-existence and, going back further, Friends, Buffy and Felicity are among the many that have staged “What If” episodes. And then you have one of my favorites, Star Trek‘s “Mirror, Mirror.” (“In every revolution, there is one man with a vision!”) Still, I would posit that “alt reality” outings are never not entertaining, and sometimes even illuminating.

What are your predictions for Castle‘s own “alt reality” hour? What if Kate Beckett had never turned to mystery novelist Richard Castle to help solve a string of murders that aped his novels?

VIDEO: Castle‘s Nathan Fillion Asks: ‘How Much Longer Can We Make People Wait for a Wedding?’