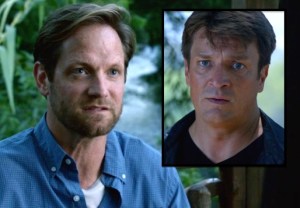 Who faked Castle‘s car crash, dragged away his body and had him doing heaven-knows-what for two months?

The ABC series’ Season 7 premiere established at least one person who has answers that Rick and Kate so anxiously seek – a mystery man who passed himself off as mild-mannered mobile home-owner “Henry Jenkins,” in the name of pointing the 12th’s investigation down the wrong path.

TVLine spoke with onetime Scandal bad boy Matt Letscher about his super-secret guest-starring turn on Castle, which continues Monday at 10/9c, as well as his portrayal of a Kennedy during Boardwalk Empire‘s final season.

TVLINE | This Castle thing has been surrounded in much secrecy. ABC didn’t even want it out that you were in the second episode.
I know…. [Laughs] Honestly, I couldn’t answer to you as why.

TVLINE | They probably didn’t want people eyeballing your character too closely. “I know he’s in the second episode, so something must not be kosher here.”
Yeah. Yeah. They’ve been all over me about that, which is fine!

TVLINE | How would you tease this strange piece of new mythology that the Castle character has gotten himself wrapped up in?
I feel like I’m not allowed to say anything, or else the “Castle secret police” will track me down and shoot me in the street. But he definitely has a history with Castle. As far as I can tell, he is someone who looms large in Castle’s past.

TVLINE | Nathan Fillion in a recent interview suggested that whatever is going on here is perhaps not particularly “dark.”
He would know better than anybody, but I don’t know…. Even on the set when we were shooting, they played both sides of the fence with me. I think that could be partially because they want to leave themselves some options.

TVLINE | Did you watch the premiere? Could it be that the characters have made some incorrect assumptions?
I’m sure some of them will be proved wrong…. TVLINE | Who would you say is more cunning – this guy, or Scandal‘s Billy Chambers?
My impression is definitely this guy. There was something more craven and crude about Billy; he didn’t think things through too well, at the end of Season 2 there. [Laughs] But this guy is a lot smarter than that. Again, I don’t know, but maybe he doesn’t have the same “killer edge” that Billy had. He’s a “cooler” character, for sure.

TVLINE | The premiere dropped three breadcrumbs that weren’t followed up on: the “38” key sewn into Castle’s pants, the Dengue fever thing, and the fact that he had been shot. Will any of those be revisited in Episode 2?
Yes, they will be touched upon. But I wouldn’t hope for resolution any time soon.

TVLINE | I’m afraid for this guy if Kate ever gets her hands on him again.
Yeah – it could go badly! It could go really badly.

TVLINE | Is the door left open at the end of the second episode, that you may darken their doorstep further?
There aren’t any definitive hints, like, “See you in a month,” but it’s definitely left open. You definitely have a greater understanding of how this guy figures into Castle’s history.

TVLINE | By the end of the episode, will we have any idea of what this guy wants — or wanted — with Rick?
Um…. TVLINE | Turning to a another mysterious figure: What’s going on with Boardwalk Empire‘s Joe Kennedy? He’s been getting kind of cozy with Margaret there.
Yeah, yeah, I was surprised. He’s just checking out his options. He’s checking out “business” opportunities…. I come back in the [series] finale. The story plays out a little bit more, and there’s a resolution to it.

TVLINE | What was it like portraying such a historical figure?
It was a blast. I mean, Joe Kennedy was a hugely important figure in the early 20th century. The different levels of our society that he held really prominent positions in are kind of startling — from banking to the stock market to liquor to political office, and the legacy he created for his kids, so that they could just “go out and save the world.”

TVLINE | Did you give yourself a refresher, to see what drove him?
I did, because there’s so much mystery about him. There’s legend about him, as this guy who hung out with gangsters and bootleggers and would step over any dead body to pick up a dime…. In the reading I did, there doesn’t seem to be any real evidence of extreme criminal activity, but he was definitely a guy who loved to play at the edges of the moral gray areas. He was an expert on insider trading before insider trading was “insider trading”; that’s how he made his dough before the Crash. He also was smart enough to anticipate the Srash in ’29 and got out. He was in the movie industry, too. — he had a production company with Gloria Swanson, whom he seduced and then took a bunch of her money and left…. It was really remarkable the swath he cut through the social fabric of that time.