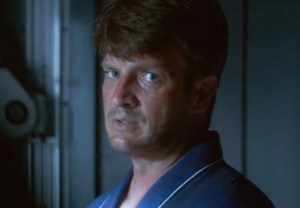 What in the world happened to Rick Castle?

ABC’s Castle and its characters raised that question — a lot — throughout its Season 7 premiere, and left us still grappling with it even after celebratory champagne flutes were clinked and Rick and Kate readied for their first night together in… a while. Up first, a recap of the twisty, turny hour, and then I’ll take inventory of the clues we have to work with, thus far.

FOLLOWING THE MONEY TRAIL
Picking right up where we left off, Kate quickly realizes that Rick is not in the well-charred car — though he had been at impact, before being dragged away. One wardrobe change later, Kate, with Ryan and Espo, storms a junkyard, where Castle’s cell phone is currently pinging. Upon seeing the Escalade he was supposedly driven away in get crushed by a compactor, they round up the grunt who worked the machinery, but get bupkus (even when Kate crosses a line or two during interrogation).

After being counseled by both Espo and Gates to keep her cool, so that she can best work the case, Kate compares notes with FBI agent Connors, who right up front wonders: Why wasn’t Rick grabbed, more easily, in the city? Why in Long Island, on his wedding day? This suggests that a vendetta against both the groom and bride was at play, so Kate trots out her files on the likes of Bracken, 3XK and mobster Mickey Barbosa (from the finale). Later, Kate questions another mobster, Vinny Cardano (from Season 5’s “Murder, He Wrote”), who apparently ordered the Escalade to be destroyed — at the request of an unknown client. Tory calls up security cam footage of where the drop was later made, and jaws hit the floor in a collective thud when we see that it was Rick himself who paid for the disposal — and using the cash he had withdrawn days earlier for his “honeymoon.”

Kate takes a moment to collect herself, while Espo and Ryan debate the true level of Rick’s involvement in his own vanishing. When the latter suggests that 3XK has been known to trade in dopplegangers, Kate shoots down the notion, saying she recognized her husband-to-be’s body language. At a loss, Kate turns to Martha and Alexis, asking them if Rick had felt under pressure before the bog day or, worse, expressed any “misgivings.” Martha assures Katherine, “He couldn’t wait” to be her husband.

UNHAPPY CAMPER
With the trail growing colder and Castle seemingly complicit in a cover-up, the FBI eases away from the case, but not before handing Kate the question: “Maybe there was a secret side to the many nobody knows?” Kate then dives in in earnest, working the phones and any possible lead — and yet two months pass, with still no answers.  Not until a Coast Guard ship off the coast of Delaware finds an adrift dinghy, with unconscious Rick inside.

Airlifted back home, Rick remains unconscious, so an ever-curious Kate asks Lanie to “take a look at him,” to see what clues she can turn up. (“You do know that living patients aren’t my thing, right?”) Lanie later reports back that A) a key stamped with “38” was sewn into the lining of Rick’s jeans, B) she found dengue fever antibodies in Rick’s system and C) he had been shot a few weeks prior. Espo and Ryan meanwhile determine the dinghy’s point of origin to be in Gloucester, Mass., for which they and Kate quickly make tracks. There, they confront Henry Jenkins, a private security firm owner to whom the dinghy belonged. He claims he assumed it floated away or was stolen — and then mentions that a guy matching Rick’s description had been camping down by the dock. The tent they find has many of Rick’s belongings inside, as well as newspaper clippings about his vanishing.

‘WE’LL FIND OUR WAY HOME’
Returning to the hospital more confused than ever, Kate has little patience for joking from an awakened Rick. But when she presses him about what happened, he only remembers the car crash… and then waking up there in the hospital. Nothing else. As for evidence indicating he’d been making money drops and camping, all whilst loved ones search for him Rick contends, “I wouldn’t just leave,” and then insists on seeing the tent site for himself. Once there, he explains that he would never have chosen that spot by the water, given a tsunami phobia he developed while researching a never-completed Derrick Storm novel. Further cementing his theory that this is a frame job, when he and Kate go to re-question Henry Jenkins up the trail, they realize that the man Kate met before was a fake.

Back at the 12th, Rick notes that whomever is behind this mystery has “unlimited resources,” and thus might even be responsible for his memory lapse. But as he tells Alexis, he is committed to untangling this web. At bedtime, Rick asks Kate how it is that she never lost hope, and she reveals how she would stare at his photo on the murder board, believing that as long as she did so, he’d remain alive. Rick apologies again for all that Kate has been through — despite his sapped memory, “I do know that I missed you. There’s no way I couldn’t,” he shares —  then acknowledges that things can’t quite be the same between them in the immediate wake of this experience.

But in time, he assures, “We’ll find our way home.”

So, to summarize what we know for certain:
1) Rick was in the car, but was dragged away after the crash.
2) Rick himself paid for the Escalade involved in the crash to be destroyed.
3) Rick was found two months later, in a dinghy off the coast of Delaware.
4) On Rick’s person was a key stamped “38.”
5) Rick’s system tested positive for Dengue fever antibodies.
6) Rick had been grazed by a bullet a few weeks before he was found.
7) The man who passed himself off as Henry Jenkins (played by Scandal‘s Matt Letscher) and apparently staged Rick’s “camping site” was a phony.
8) Series creator Andrew W. Marlowe said this mystery is rooted in a new mythology that will “open up some really interesting aspects of storytelling for the Castle character.”
9) Nathan Fillion, in an EW.com interview, suggested that this new, Rick-centric mythology won’t be as dark-n-twisty as Kate’s.
10) And just because it bears repeating: Rick and Kate will wed by the end of 2014.

Did I leave any proven facts off? Oh, and what did you think of the long-awaited season opener?