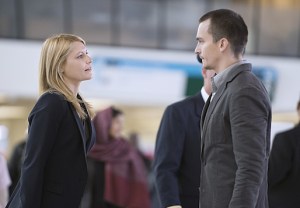 Showtime’s Homeland concluded a trilogy of sorts with its Season 3 finale, as Nicholas Brody (played by Damian Lewis) — a disgraced Marine sergeant who loomed large as both a sometime threat to his own country and as a pivotal figure in CIA officer Carrie Mathison’s life — was written off the canvas in a quite definitive manner.

With Brody removed from the equation, Carrie (Claire Danes) stationed in Kabul and her onetime boss Saul Berenson toiling for a private military contract as Season 4 opens this Sunday at 9/8c (with two new episodes), “It is a clean start for Carrie,” showrunner Alex Gansa tells TVLine.

Yet as Carrie grapples with a massive crisis, one somewhat of her own doing, in the geo-political arena, she will also have to juggle “a number of” significant relationships in her life, Gansa says.

“She has an important relationship with her little six-month-old daughter [Frannie],” Gansa notes. “She has an important relationship with the memory of Brody; and she’s got a burgeoning relationship — although not romantic yet — with Peter Quinn (Rupert Friend),” who now works alongside Martha Boyd (In Treatment‘s Laila Robins), the U.S. ambassador to Pakistan. Complicating the Carrie/Quinn dynamic is the fact that since the events of Season 3, the latter has developed a distaste for the CIA’s comfort with “kill lists” and “bulletproof” decisions.

Carrie also will serve as a mentor to Farah Sharazi (Nazanin Boniadi), “who never trained to be a case officer, but Carrie needed people she could trust on the ground there,” Gansa explains, as well as develop a bond with Aayan Ibrahim (Life of Pi‘s Suraj Sharma), a Pakistani med student possessing a unique perspective on the calamity that sets Season 4 in motion.

Saul, meanwhile, “is not happy at all” with his new position in the private sector, which portends to create new, unneeded friction with wife Mira (Sarita Choudhury). “The money is good but Saul is an archetypal Washington figure, a guy who’s lived at the center of things for so many years,” Gansa explains. “Now that he finds himself not in that gravitational pull of world events, he misses it desperately.”

Yet even with Andrew Lockhart (Tracy Letts) still lording over the CIA, Saul will be rescued from his new, New York City-based existence as the season unfolds, when all hands are needed on deck to stem the bleeding of the aforementioned crisis. As a result, says Gansa, “Carrie and Saul both get to do things that they were trained to do, which is serve overseas.”

Moving on from the Brody years and returning Carrie to what she does best — which, as seen in early episodes, certainly is not mothering! — Homeland is poised to return to its own original mission, which is to hold a mirror up to the world and find drama to mine from that.

Notes Gansa: “It’s sometimes difficult to read the front page of the paper these days, and the tone [of Season 4] reflects whats going on in the world right now, which is pretty scary.”