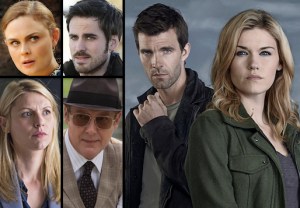 How will a lost love affect Bones? Do we spy sparks between Homeland‘s Carrie and Quinn? Who’s the latest royal to visit Once Upon a Time? Who’s at the heart of a Haven mystery? Read on for answers to those questions plus teases from other shows.

I’m desperate for some new Bones scoop. Got anything for us about episodes past the premiere? Titles, maybe? –Claudia
You want titles, I’ve got titles! Among the new season’s first batch of episodes, you will find “The Corpse at the Convention” and “The Lost Love in a Foreign Land.” There — titles.

With less than a week to the Season 5 premiere, feel like sharing any Haven scoop? Anything on Jennifer’s fate? Dave’s fate? –Michelle
Jennifer’s fate is the hot topic as the season premiere plays out – different people need to find her for very different reasons. Things don’t look very good for Dave, either – though there’s a final scene with him that will make you go hmmm. Now, I present you with a game: See if you can ID who says quips of these premiere quotes:
A) “ That lighthouse just can’t catch a break.”
B) “You try operating a supernatural doorway to another dimension using a vampire novel and a positive attitude!”
C) “The handsome ones don’t have to be very smart, do they?”
D) “Be careful, she took down Dwight.” / “And I will never let him hear the end of it.”
E) “I’ll always love you, Parker.”

Dying for a Homeland scoop, particularly one involving my favorite duo, Carrie and Quinn. Will sparks fly this season? –Jo
Having hit the Season 4 premiere screening on Thursday night, I can avow that, yes, sparks of a kind are flying between the two when the show returns – primarily because they find themselves on opposite sides of a budding conflict. As Claire Danes explained it to me at the event, “Quinn is eager to get out of the [espionage] business and is recognizing behavior in Carrie that he himself has had in the past as an assassin, and he’s concerned for her. So he trying to jar her into ‘consciousness,’ but she’s reluctant to engage.”

Longtime reader, first-time writer. Do you have any Blacklist scoop? –Steph
Get ready to meet Red’s little friend! Literally. Episode 5 of the NBC hit’s second season will introduce us to Glen, a “diminutive” DMV wonk who has a long history with Spader’s character. Also being cast for that episode is the recurring role of Zoe, a “worn but pretty” woman who holds no less than the key to Red’s past.

On The Vampire Diaries this season, will we be meeting the leader of Luke and Liv’s coven? –Tom
We’ll learn a lot more about the Wonder Twins in Season 6, but before we meet their mysterious leader, we’ll first discover what said coven is all about. “It’s linked heavily into the deeper mythology of the show this season,” executive producer Caroline Dries says. “Once we start understanding why the heck we’re at Whitmore and what their coven is all about, we’ll really understand their plight in life and how it affects our characters.”

Is there anything you can tell us about Hook’s arc for this season of Once Upon a Time that we haven’t heard yet? Anything on his childhood/parents? –Ana
Series cocreator Adam Horowitz would only say that when it comes to the good (?) pirate, “There is more delving into his past to come” – though the burning question of whom he traded the Jolly Roger to, in the name of finding Emma, won’t be revealed until “somewhere down the road.”

Do you have any Once Upon a Time scoop that has nothing to do with any of the ‘ships? –Sara
Always! For Episode 7, the ABC series is casting the one-off role of a pompous prince who beneath his veneer of confidence-slash-arrogance is not much more than a coward ill-equipped to handle conflict.

The wait for more Sleepy Hollow is killing me! Tide me over with some scoop? –Meaghan
As if Ichabbie ‘shippers needed more headaches to worry about, casting is underway right now for the recurring role of David, a charismatic hunk who “has seen a lot in his lifetime” – and is poised to be a romantic interest for Ms. Mills when he surfaces about two-thirds of the way into Season 2.

Got anything juicy on CW’s The Flash? –Andy B.
Looks like Central City will get hit with a Blackout in Episode 7, when Farooq, an electricity-wielding metahuman, seeks vengeance against Dr. Wells. Flash to the rescue? Mayyyybe not, seeing as Barry will be suffering a “powers” outage just when this new baddie arrives.

I was hoping you could give some scoop on how Jax is handling the loss of Tara going into Season 7 of Sons of Anarchy. He better be mourning and seeking revenge! –Brittany
It’s about 25 percent mourning, 75 percent revenge-seeking – though, as you can imagine, Gemma might gently “nudge” him into seeking his pound of flesh from alllllll the wrong people. Ugh.

I am probably the biggest Linseride (Erin Lindsay/Kelly Severide) fan in the world. Can you please tell me something good and positive about them and their relationship for the next seasons of Chicago Fire/Chicago P.D.? –Roby
The good news: The twosome are perfectly suited to each other, says exec producer Matt Olmstead. “With Lindsay, [Severide] feels like he’s met his equal,” he explains. “It’s great because there’s no agenda. ‘I’m not getting beat up for showing up late. I’m not getting beat up because I’m gone 24 hours. Someone understands me.’ And in that mutually allowed freedom, they’re both able to blossom in this relationship. It definitely informs his approach to Lindsay after the collapse.” The bad news: Perhaps there is such a thing as too much freedom.

Do you have anything on how things are with Mary and Francis when Reign comes back? –Bree
Mary and Francis will face immeasurable new conflicts — and understandably so — now that Lola has given birth to her and Francis’ lovechild, but the real couple struggling at French Court in Season 2 will be Bash and Kenna. “There are going to be new players who come in over the course of the season,” executive producer Laurie McCarthy teases. “One of them might have a history with Bash that’s going to unnerve Kenna.”

Since The Glades was cancelled (and no one I know that watched the show can figure why), will it ever come out who shot Jim on his wedding day? –Peggy
Having already asked Matt Passmore for his take, I more recently asked Kiele Sanchez if she knew who gunned down her TV groom. “I actually like to spread the rumor that [Callie’s] son shot Jim. But no, I have no idea who did it,” said the actress, who is now the female lead on DirecTV’s Kingdom (premiering Oct. 8). Beyond that, Sanchez had no “optimistic news” to offer regarding any follow-up. As for her own Season 5 wish list, she hoped to see Manus’ and Carlos’ home lives explored, as well as see what married life is like for Callie, Jim and “a kid going through the awful teenage years.”

Could I have the Inside Line on Brooklyn Nine-Nine? –Rachel
As previously reported, The Closer‘s Kyra Sedgwick will have a short arc as Deputy Chief Madeline Wuntch, Captain Holt’s longtime nemesis. But what’s at the root of the top cops’ ongoing feud? Turns out it has something to do with… Derek Jeter?

Real questions, real answers. If you need the Inside Line on a favorite show, email InsideLine@tvline.com! (With reporting by Andy Swift, Vlada Gelman)