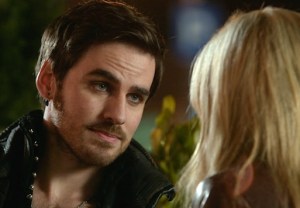 Once Upon a Time‘s Captain Hook is due for a makeover during Season 4, presumably keeping the guyliner while shedding some leather.

With the ABC series’ premiere still six weeks away — but on the occasion of the Season 3 Blu-ray and DVD sets hitting stores — TVLine spoke with Colin O’Donoghue about Hook’s adventures to date, what the bad boy buccaneer sees in good Miss Swan and more.

TVLINE | Watching the Season 3 Blu-ray set’s blooper reel, it appears that steering a galleon does not come naturally to you.
[Laughs] It came to me naturally, but I’d been steering it for a few hours at that stage – I wasn’t sure what direction I was supposed to be going!

TVLINE | Looking back on Season 3, did you prefer one arc to another, for any reason?
Not really. I was excited when we started last season exploring the Neverland world, and I think we did it justice — it was fun to take someone like Pan and turn him into this creepy, malevolent figure. And the way that Wicked Witch was treated in the second half was brilliant. It was very clever how they put “two seasons” in one.

TVLINE | And you and Jen Morrison had that fun “Back to the Future” episode to close Season 3.
Yeah, that was fun. Jen and I had such a blast in all of those scenes.

Watch Hook and Emma’s season-ending embrace, then read on for more:

TVLINE | Hook, as we’ve seen in flashbacks, was seldom a one-woman man. Why do you think Emma draws him in so?
I think that as Jennifer has said, he definitely sees a side of himself in her. They’re quite similar people, although they’ve gone on different paths…. They both have had heartbreak and disappointment….. She sort of captured his heart, and you never really know who you can fall in love with until it’s there – so I think that took Hook by surprise, that he could feel like that again after the death of Milah.

TVLINE | But should we worry that now that he’s back in our realm, and he and Emma are on the same page romantically, he might get too domesticated?
He definitely won’t be, because the two of them are very, very complicated people. [Laughs] At the end of the day, Hook is essentially a pirate trying to live in a quasi-modern world, trying to figure out how he can make that work, and how he can try to make a relationship work. I’m interested to see how that will develop.

RELATED Once Upon a Time Season 4 Scoop on The Knave, Emma’s New Home

TVLINE | On top of everything else, Emma will be feeling guilt about the Regina/Robin Hood/Marian thing. What counsel does Hook offer Emma? Does he try to maker her feel better, or is there some “I told you so”?
We pick up from where we left off at the end of last season, and Hook really wants this relationship to work out, so he’ll try and make that happen.

TVLINE | And where do things stand with the Hook/Charming “bromance”? Is Emma’s father at all wary of her choice in boyfriend?
They definitely get on a lot better than when they first met, but it’d be hard to trust a pirate, based off all the legends and such. It’s up to Hook to gain and hold onto that trust.

TVLINE | You showed me on set just how remarkably heavy Hook’s leather coat is. Was “lightening up” his wardrobe something you ever approached [series creators] Adam and Eddy about?
I’ve mentioned it, and it’s going to happen this season – people will get to see Hook in more modern clothes. So I’m intrigued to see how Hook will feel in them, how he’ll fit in…. I guess he’s been wearing the same clothes for 300-something years, so I just hope he can get them off, that they haven’t actually become a part of him.

TVLINE | Will he be having any amusing brushes with modern technology?
Storbyrooke is obviously very different from the 18th-century high seas, so he has to sort of come to terms with it all. Yeah, there are going to be some fun little moments with that.

TVLINE | Maybe he will get his own iPhone?
[Laughs] Yeah, maybe. Or maybe we’ll see him playing some pirate “app.”