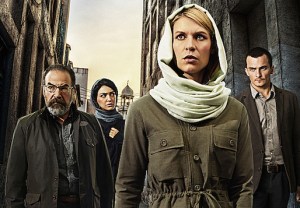 Showtime has decided to bring Homeland back with a double-episode salvo.

The first two episodes of Season 4 — which is being filmed entirely on location in South Africa, and finds Carrie Mathison assigned to one of the most volatile and dangerous CIA stations in the Middle East — will air back-to-back on Sunday, Oct. 5, starting at 9/8c.

Hoping to have amped up the Homeland buzz by that measure, Showtime has in turn moved up the series premiere for The Affair — a twisty relationship drama starring Dominic West (The Wire), Ruth Wilson (Luther), Maura Tierney (ER) and Joshua Jackson (Fringe) — to Sunday, Oct. 12, at 10/9c.

“[T]here is such strong anticipation for the start of Season 4 that we wanted to give Homeland fans an extra generous helping of Carrie and company,” Showtime EVP Gary Levine said in a statement. “Once we decided to premiere Homeland with a double episode, it made sense to use the momentum of that event to launch our newest series, The Affair, the very next week.”