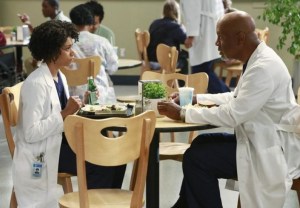 In this week’s Maggiecentric Grey’s Anatomy, just about everything than could go wrong for Mer’s secret half sister did – and then they went wronger still. Here’s how “Puzzle with a Piece Missing” ultimately fit together.

RELATED Grey’s Anatomy Exclusive: Get the Story Behind That Surprising Recast

COLD FRONT | Even when Maggie met Derek and Zola in the hospital cafeteria, Mer was so chilly to the newbie, she could have given them all frostbite. Later, Maggie tried to demand that Mer at least look at her when they’re speaking… and was interrupted by a singing telegram from her adoptive parents – a singing sturgeon telegram, no less! And, as we all know, nothing says “Take me seriously!” like a warbling fish!

OPEN MOUTH, INSERT FOOT | At first, it seemed as if Maggie was bonding with Jo after yelling at her (explaining that nice, young, pretty women like themselves have to “bring the thunder” at work in order to be taken seriously). But then, Alex’s girlfriend bragged about his likelihood of winning Cristina’s board seat – without revealing that they were dating – and Maggie congratulated him in front of Dr. Butthole… who, having no idea he was quitting, canned him. In turn, Maggie axed Jo from her service. Temporarily, anyway. (Maggie couldn’t help but forgive Jo when the resident marveled that, in just one day with Pierce, she had learned “a crap ton.”)

YOU WIN SOME… | Although Maggie’s interest in genetics piqued Bailey’s interest – and sent Miranda back to her locked-up genome lab – it wound up getting Pierce in hot water with Owen and affording her a chance to mouth off to Jackson before realizing what a lofty position he holds at Grey Sloan. However, her renewed investigation into the mysterious case of the McNeils – you remember, that unfortunate family Cristina treated last season – yielded impressive results: Genetics were to blame for the kids cardiomyopathy diagnoses.

YOU LOSE SOME… | After Richard and Amelia encouraged Maggie to get to know Mer in spite of her prickliness, the half sibs’ relationship reached what appeared to be a point of no return when Pierce let an elderly cancer patient die (per the wishes that the patient’s daughter wouldn’t grant). Initially, Mer – unaware of the woman’s readiness to go – was so outraged that she ran straight to Owen. But, upon learning the facts, Mer supported Maggie when she had to inform the deceased’s daughter that her mother had passed away. Encouraged by this, Maggie finally blurted out to Mer that Ellis was her biological mother. Rather than respond with empathy or even curiosity, Mer hissed that Maggie was wrong or lying, and either way, she wanted nothing to do with Pierce. So, no hug, then?

WORKS IN PROGRESS | At least, Maggie seemed to have made a friend in Amelia. (Since they both admitted that they hadn’t gotten lucky in a long time, can a girls’ night out be far behind?) Meanwhile, on the back burner, Callie and Arizona argued about the latter’s desire to accept the fellowship with Dr. Herman when they were already planning to have another baby. In the end, Arizona decided to turn down Dr. Herman, at which point, naturally, Callie insisted that she go for it.

OK, your turn. What did you think of the episode? Is Maggie growing on you? Hit the comments!