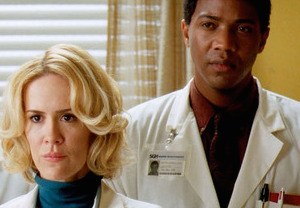 Prepare to do a double take during tonight’s Grey’s Anatomy premiere (8/7c, ABC).

As previously reported, Shonda Rhimes’ medical soap will kick off Season 11 with a series of flashbacks depicting the love affair between Ellis Grey and Richard Webber — a tryst that we now know produced Meredith’s half-sister, Maggie.

But TVLine has learned exclusively that the role of Young Kate Burton — originated by American Horror Story vet Sarah Paulson in Season 6 — will now be played by Army Wives‘ Sally Pressman.

I’m told Paulson’s AHS: Freak Show shooting schedule precluded her from returning, which led the show to reach out to Pressman. (The actress has ties to Shondaland, having played the daughter of Lisa Kudrow’s character on Scandal last season).

Additionally, sources confirm that Burton — who shot several flashback sequences herself — will no longer appear in tonight’s opener. She is expected, however, to turn up later in the season.

As of now, Pressman — who just last week landed a top-secret stint on Once Upon a Time — is on board for two Grey’s episodes, the second of which is slated to air later this fall (that ep will also feature Young Richard Webber, once again played by Angel‘s J. August Richards).