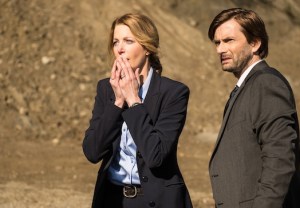 It may be the setting for the murder of a 12-year-old boy, but Fox’s Gracepoint — both the show, and the fictional Oregon town where it’s set — is positively postcard picturesque.

The tail of a whale rises serenely above a dark Pacific wave. Wet leaves blow across a deserted main street dotted with quaint shops. If you close your eyes, you can almost smell the salty air, hear a gull crying overhead.

RELATED John Francis Daley Opens Up About Sweets’ Shocking Bones Exit: ‘I Feel Like I Lost a Part of Me’

You’d almost want to book a week at the local B&B, if it weren’t for the fact that pretty much every person you meet — from the old man who rents kayaks to the adorable moppet with a dinosaur poster on his wall — might be a vicious killer.

Here’s the setup of the series (based on the British hit Broadchurch): The body of a young boy named Danny Solano is found on a beach at the foot of a cliff (a cliff where we’d seen him standing in the dead of the prior night — blood dripping from his fingertip). On the case? Det. Ellie Miller (the absolutely stellar Anna Gunn), who’s just come back from vacation and learned she didn’t get a promised promotion, and the newcomer who scored job during her absence, Emmett Carver (David Tennant). Ellie barely has time to mourn her professional setback: The victim turns out to be her son’s best friend — and since this is the first murder she’s ever worked, she reluctantly takes her cues from the gruff, unlikable Carver, who left his last job under a cloud of scandal from which he was apparently exonerated.

Most of what unfolds over the hour is, on its surface, crushingly sad: Danny’s mom stumbles across the crime scene in a stroke of horrific coincidence; Danny’s father weeps over his son’s corpse in the morgue and begs his forgiveness for not being there to protect him; Ellie breaks the news to her pale son Tom; Danny’s sister brings his stuffed monkey to the crime scene where it becomes the start of a makeshift shrine.

Delectably, Carver tells Ellie when they arrive at the Solano house for the first time that she can’t be the one to break the news to the family — that instead, she must silently observe the people she knows so well, and keep an eye out for any behavior that’s in any way out-of-the-ordinary. Carver’s words serve as a template for the audience, too, putting us on edge to peculiarities and inconsistencies.

The three most suspicious acts of from Episode 1?

* Little Tom, processing news of his closest friend’s death, asking his mother if he can be alone, and then promptly deleting his text history (all of ’em from the deceased) and then wiping out his computer hard drive.

* When Danny’s mom asks her plumber husband where he was the night of Danny’s death, his lack of specificity — “I told you, I was working” — is the opposite of comforting. My guess is the dude is having an affair. Also, how cool was that long tracking shot of Michael Peña walking through downtown Gracepoint and introducing us to so many suspects? If we’re going down the rabbit hole for a sec, I’ll take a bet that one of the folks introduced in said shot will turn out to be the guilty party. Yes, I wrote this sentence before Fox provided TVLine with exclusive video of the exact same scene (embedded below) — viewed through the very paranoid hashtag #SuspectEveryone.

* A weathered older woman with a dog (Jacki Weaver) always seems to be skulking around the crime scene.

There are dozens of other red herrings and oddities swimming around in Gracepoint‘s murky sea — but they’re all presented with a quietude that borders on the mundane, and that only serves to make them all the more suspicious.

But what did you think of the Gracepoint premiere? Any early theories about who killed Danny? What did you think of Gunn and Tennant in the lead roles? And will you tune in for Episode 2? Grade the premiere in our poll below, then sound off in the comments!