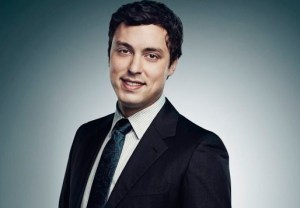 Bones pays its final respects to Dr. Lance Sweets in tonight’s episode (8/7c on Fox), and it seems likely that John Francis Daley will be among the millions of fans watching the character’s emotional farewell.

“I had a strong bond with Sweeets,” Daley tells TVLine one week after his alter ego’s onscreen death. “I really did feel like I was losing a part of me. I had so much compassion for him. He was such a good person… He had gone through so much, and to see him die in such a grim way was shocking.”

As TVLine reported, Daley’s burgeoning directing career — he’s currently helming a remake of National Lampoon’s Vacation — led The Powers That Be at Bones to kill off Sweets. What did he think of that decision? The actor-auteur tackles that question in the following Q&A. He also opens up about his less-than-ideal last day of shooting, shares his thoughts on Sweets’ final baby wish and offers a critique of his sorta-replacement, Aubrey.

TVLINE | In a perfect world, would you have liked to have been able to jump back into Bones after you finished shooting Vacation?
One hundred percent. I knew it would be tough, because I was asking for four months off. And I was so happy that they were able to accommodate that. But, yeah, in a perfect world, I would’ve loved to have [completed the movie] and then segue back to the Bones family. I had spoken to Stephen Nathan about it all, and he said it would be more satisfying for the fans to conclude Sweets in a dramatic way rather then for it to be up in the air and have him come back midway through the season.

TVLINE | Were you able to accept that decision, to be OK with it?
I pretty much had to be. [Laughs] The directing job was not something that I could walk away from. It was such a huge opportunity. It feels like a good next step in my career and my life; I always dreamed of being a director. So to be able to do something like this on such a huge scale —it’s a huge studio movie — it’s definitely not something I could turn my back on. It was a sacrifice for sure. But I’m three weeks into filming and having the time of my life. I couldn’t imagine it working out any other way.

TVLINE | What has this past week been like in terms of the reaction from fans? Sweets’ death pretty much blew up Twitter.
It was nice. People were saddened about the loss of Sweets, but understanding that I — as a person — wanted to fulfill a dream. It was actually surprising. I [expected] some people would be taking it out on my personally. And up to this point, no one has said anything [negative to me] in the Twitter-sphere. No one’s bashing me. It was also nice to know that there was such a loyal fan base of the show, and of Sweets in particular, who were devastated by the loss. It was bittersweet.

TVLINE | I read that you broke down while filming your final scene, the one where Sweets’ body is brought into the Jeffersonian. What were you thinking about when you were overcome with emotion?
It was a funny day. If I were scheduling it, I would’ve scheduled it kind of differently. [Laughs] The very last thing we shot was me in the body bag being zipped up. I was covered in blood. No one really wanted to touch me because I was all messy. I couldn’t even give anyone a hug. We were shooting at midnight, so most of the primary crew were already gone for the day. The writers had all gone home. The producers were at Comic-Con, as were Emily [Deschanel] and David [Boreanaz]. So I walked out of a nearly empty stage and couldn’t say a proper goodbye to people. And as I was walking to my trailer I sort of realized, “Oh, s–t, this is weird.” And then the tears started coming. It was very cathartic.

TVLINE | Have you seen tonight’s episode with the wrap-up to the case and Sweets’ memorial?
No.

TVLINE | Your body parts get a lot of play. We see your bones, your heart…
[Laughs] Good lord. That is pretty gruesome.

TVLINE | We also learn that Sweets wanted to name his unborn son Seeley, after Booth. Thoughts?
It seems right. It seems like the natural thing that he would want to do.

VIDEO Exclusive Bones Preview: Sweets Sends Daisy a Message From Beyond the Grave

TVLINE | Are you at all bummed that Sweets and Daisy reunited during the time jump? It kind of cheated you and Carla Gallo out of some potentially fun material.
Absolutely. I love Carla. She hails from the Judd Apatow family. She was the lead of Undeclared, I was in Freaks and Geeks… We’ve known each other for such a long time in passing, and then Bones brought us together as really good friends. She is such a funny, quirky, awesome person and I am so happy for her and her baby. She’s been baby crazy for a little while now. [Laughs] So it’s nice to finally see her as a mom. She’s going to be one of the best moms. That will be tough to not be able to work with her on the show and hang out.

TVLINE | Thoughts on your quasi-successor Aubrey? You guys have the same basic physical build and hair color. There are several moments in tonight’s episode where I thought he was you.
[Laughs] I’m sure that was intentional. It probably made the transition a little more seamless. I think [John Boyd] is a really cool guy from the couple of scenes that we did together. A really nice dude.