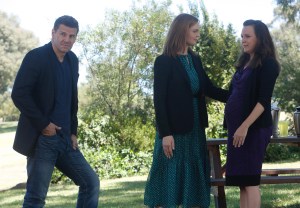 On Thursday’s Bones, Booth, Brennan & Co. paid tribute to John Francis Daley’s fallen shrink with an appropriately no-frills memorial service held on a hilltop overlooking Washington, D.C. (Admit it, you cried during Brennan’s speech. We’re not here to judge you.)

Below, exec producer Stephen Nathan answers our myriad burning questions about the emotional hour. Included among our queries: Why was Sweets’ service so poorly attended, and why wasn’t widow Daisy more of a wreck?

RELATED John Francis Daley Breaks His Silence on Sweets’ Death: ‘I Feel Like I Lost a Part of Me’

TVLINE | Did you anticipate such a strong fan reaction to Sweets’ death?
We knew it was going to be very upsetting, but the response is really intense. It’s a testament to the show, but really to John. People were so connected to him and the character that the loss was personal. I don’t mean to be callous, but that’s the way it should be. If [a death like this is] easily dismissed it means the dramatic impact wasn’t that great.

TVLINE | That was one hell of an elaborate conspiracy. I’m still not sure I’ve connected all the dots…
It was a very complicated thing for us to do. And it was a little new for us. I don’t think we’ll be doing as intense a conspiracy again. That’s a meal you have once. And all of the dots weren’t connected. As resolved as this is, there’s never a way to resolve everything. We wanted to keep some part of it open. They’ve put this to bed, but that doesn’t mean it couldn’t wake up at some time in the future.

TVLINE | Booth and Brennan had one of their biggest, most heated arguments in recent memory. It was oddly fun to watch them go at it. What was it like writing and shooting that sequence?
It actually was a great sequence to write because we never do it. The tension, stress and emotions were so high between them; they were at a breaking point. Circumstances had backed them into a corner, and we just went for it. The anger, the fury and the sense of loss and confusion were so overwhelming that we just let Booth and Brennan have at it. It was a great, cathartic scene to write. And it was really great to see them almost tear each other apart and know that they could handle it. It was seeing what a good relationship is.

TVLINE | Daisy very quickly transitioned from grieving widow to squintern-with-a-mission. Was there ever any talk of giving her a big breakdown scene so we could see more of her mourning process?
I think we did with the scene between Daisy and Brennan where they were talking about Sweets over his remains. There wasn’t a big, giant breakdown because we have seen those before. We let the steam out a little bit at a time. And it culminated in the last scene when they said goodbye to him. There was a sense that they had grieved, they had avenged his death, and now it was a time to let him go. And clearly it’s not finished. Daisy has to have the baby. The emotional consequences of that have to be dealt with too. We’re shooting that episode now. Question: Let’s talk about the memorial service itself. Brennan’s speech was really beautiful. Talk to me about the decision to have her essentially deliver the eulogy, vs. Booth or Daisy?
There was nothing formal [about her speech]. It started as just a casual conversation among friends and Brennan, in her usual way, said all the talk about God and religion was nonsense. Once she started speaking I don’t think she knew what she was going to say. She was just trying to explain herself to Booth, and as she did, she opened up in a way that surprised even her. It was all very spontaneous. And there was nothing to be said after that because she was saying what everyone felt.

TVLINE | Are you going to have the cast sing “Coconut” every time a major character dies?
[Laughs] Hopefully we’re not going to lose anyone else for a while. It had to be. It was Sweets’ jam. It would’ve been sacrilege to not have a rag-tag group singing that song to him.

TVLINE | Why weren’t more of the squinterns at the service?
We wanted to keep this small. We wanted to keep it among the people who were instrumental in resolving this case and who were there in an intimate way when Sweets died. If we had had a [bigger] group, the intimacy of the moment would’ve been lost. Brennan’s speech couldn’t have existed in that environment. And that took precedence over a grand affair.

TVLINE | The physical resemblance between John Francis Daley and John Boyd is kind of nuts. There were several moments in the episode — like the diner scene — where, at first glance, I thought I was looking at Sweets and not Aubrey. Was that intentional? Coincidence?
It just happened to be. We thought about it for a moment and then went, “This is fine.” John is such a different presence. And Aubrey is such a different character. It didn’t seem like it was going to be a problem. That said, I kind of like that a hint of Sweets still exists. There’s a reminder in the ether of the show that he’s still with us.

TVLINE | Will Daisy and Sweets’ son be named Seeley?
That’s what Sweets wanted…

TVLINE | Will he get what he wanted?
Oh, I think he will.