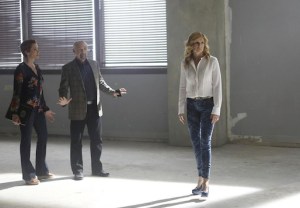 Well stick a straw hat on my head and call me Minnie Pearl: It looks like Juliette’s not going to give birth to demon spawn Jeff Fordham’s child, after all.

In a surprising move for a primetime soap, this week’s Nashville indicates the drama won’t pursue a who’s-the-daddy storyline with the eminently watchable — if not unfailingly faithful — Ms. Barnes.

I’ll expound upon my relief later in this recap, which also covers Rayna’s ire about the media wanting the dirt on her relationship with Luke (guys, she’s not being evasive; he’s just not that interesting!), Deacon’s difficulties now that Maddie’s acting like her sulky self, Layla’s reversion to form and Zoey’s inability to walk and sing at the same time. Read on for the highlights of “How Far Down Can I Go?”

UNHAPPY WIFE, UNHAPPY LIFE | Will is riding high after he learns that his album knocked Rayna’s out of the No. 1 spot after only a week. But the joy is cut short by the fact that his wife perpetually looks like she sucked on the lemons life handed her. She’s angry that he’s gay, she’s angry that she was duped into marriage, she’s angry that her career is DOA. Will pressures Jeff — who, in turn, is feeling heat from his boss to regain some of Edgehill’s success (not so smirky now, are ya, turtle?) — to help Layla get a win.

Under duress, Jeff sweet-talks the Patsy Cline biopic people into letting Layla audition, but it’s a huge joke and even she knows it. It doesn’t help that Jeff runs into possible-next-big-thing Sadie Stone (hi, Laura Benanti!) at the audition and seems determined to woo her into being an Edgehill artist.

So Mrs. Lexington turns the hatred on her husband, channeling some of the bitchiness we haven’t seen in a while when she tells him, “You owe me everything. I own you.” Her demands: He’ll take her on tour and help get her career going, or else. And just in case he’s not clear on the matter, she spits, “I do not care about you. I hate you.” COURSE CORRECTION | The news of Will’s album’s success is, understandably, met with far less enthusiasm in Rayna’s camp. To be fair, the First Lady of Country Music is already in a bad mood after a reporter cares more about the particulars of Luke’s proposal than in Highway 65’s new headquarters. (The journo dares show more interest in a major life event than in an empty office suite? What a monster.)

Ray rails against Will’s success to Bucky and Tandy, but her manager tactfully points out that Will has a reality show that keeps him in the public eye. (Is that reality show actually airing yet, though?) Rayna complains that she has never invited the public into her private life, yet she’s had just about every album go platinum. Times have changed, Bucky replies, adding, “What got you here is not gonna be enough to keep you here.”

GRIN AND BARE IT | Luke teases Rayna that between the money from Lamar’s estate and his own earnings, “You can just sit at home all day, being Mrs. Luke Wheeler.” He’s joking-maybe-not-really, but still: ugh. After talking with her endorsement-whore of a fiancée, Rayna agrees to add more tour dates to her schedule, meaning she won’t be around for Daphne and Maddie as much as she’d planned. And when Good Morning America‘s Amy Robach presses Ray for a few engagement details during a concert appearance (oh, hi Luke Bryan! Wait, you’re not going to sing? Oh, OK…), Ms. Jaymes gives into the machine and offers a few tidbits from her life.

A moment, if you please, Rayna: As a reporter, I realize I’m biased. And I’m not suggesting you do anything that feels super weird to you. But we’re all adults here; a journalist’s job is to ask questions, yours is to answer — or not. If you don’t want to talk about your private life, don’t talk about your private life. There are ways to do it without giving the media the stink-eye (as you did in the beginning of the episode) and without sacrificing every single personal moment like a bored Kardashian tweeting from the sidelines of a runway show.

DEACON IN THE DOLDRUMS | Meanwhile, Deacon is so sad about Rayna’s rejection, he’s taken to staring out the window in baleful silence. The only thing that rouses him to any kind of action is hanging out with Maddie, who has decided to be her pissy teen self around him. Great timing, kid. She yells that he should’ve tried harder to win her mom back. He yells that he proposed and Rayna said no. Then they’re both sad — and that only deepens when Luke won’t let Deacon out of his contract, meaning that Deke still has to go on tour with his hat-tipping rival.

JUST LIKE OLD TIMES | Gunnar’s new house and recording studio is sweet, so Zoey should be totally excited when he asks her to move in, right? But she’s too worried about Scarlett’s return to town, and that anxiety only heightens when she sees the pair working on lyrics one afternoon in the studio.

Zoey’s so shaken, she can’t even remember the back-up singer choreography she has to learn before she leaves on Juliette’s tour. (Side note: When Gunnar mentions Z’s long hours in rehearsal, Scarlett sighs knowingly and says, “Yeah, I don’t miss that part of the road.” Calm down there, Scar: You were on tour for five minutes, 90 seconds of which you spent crouched under a piano. Easy on the embittered veteran schtick, OK?)

But Zoey eventually comes around, sees that she’s being ridiculous (she’s actually not; there’s no way Gunnar and Scarlett aren’t going to have some sort of interlude sometime in the very near future) and agrees to move in. Yay?

RELATED ABC Scoops: Nashville, Once Upon a Time, S.H.I.E.L.D. and More!

AVERY BARKLEY LASSOS STORK! | Juliette is very agitated about the pregnancy, and her unease manifests as her yelling at Emily and getting easily distracted by the stuff Avery left at her house. (In other words, no one can tell anything is different and/or wrong.) She reads for the Patsy Cline part and nails it — though doesn’t escape without Jeff making a crack about her weight gain — then drags Avery’s junk back to his apartment, where he catches her dumping it at his door.

Then we are treated to the most watchable few minutes of the entire hour, as the two fight about nothing because they’re so upset and hurt and angry. (One Hayden Panettiere-Jonathan Jackson scene in an episode is not enough, Nashville.) The next time we see Juliette, she’s in her doctor’s office, prepping for an abortion. But the state-mandated ultrasound indicates that she’s nearly eight weeks along, not four like she thought. And given that her terrible turtle tryst was a month earlier… “This is not Jeff’s,” she says, tears running down her face.

I’m proud of Nashville for doing the unexpected. Let’s hope it sticks. And on a related note, it’s too bad Avery is choosing that exact moment to suck face with Nadine, the Bluebird’s newest and, based on how quickly she irks me with such little dialogue, most efficient waitress!

Now it’s your turn. Do you think the show will somehow find a way to keep the baby’s true paternity up in the air? Will you miss Tandy now that she’s resigned from Highway 65? Did you revel in watching Jeff Fordham taken down a peg by Mario Van Peebles (who also directed the episode)? Sound off in the comments!