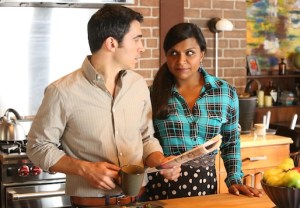 “You’re a perfect couple: You’re terrible people and you’re huge liars,” Cliff hollers at Danny in Tuesday’s Mindy Project, and he’s not wrong — at least not in this week’s episode.

After all, by the time Cliff’s frustration reaches its zenith, both Danny and his self-involved girlfriend have flung falsehoods at each other and repeatedly fibbed to the heartbroken lawyer. Plus, we learn Mindy hasn’t paid taxes in six years?!

It’s as if the docs’ romance has made them even bigger weirdos than when they were apart, as you’ll see while we review what went down in “Crimes and Misdemeanors and Ex-BFs.”

LIKE OLD TIMES | Mindy’s failure to pay income taxes puts the practice in a jam: If the government puts a lien on her assets, all of the other partners are going to suffer, too. “I thought they took it out of our paychecks!” she cries, cementing the fact that there is no way I’d ever allow this woman to coax a child out of my body. She recalls asking Cliff to help her with the problem months ago; now, he’ll only do it if she and Danny are broken up. So Dr. L lies and says she and Danny are through because he cheated on her, which pleases her ex.

Know who’s not pleased? Dr. Castellano, who’s forced to endure an elevator ride not only with the smug lawyer but also with midwife Brendan Deslaurier — another dude who’s seen Mindy naked. “I’d hate to be my heavy bag tonight,” Danny later grouses. But he truly has no ground to stand on: As Cliff informs Mindy during a “work” dinner at a fancy restaurant, her boyfriend is still legally married to Christina.

THE AGONY OF THE SEAT | Danny’s quick to point out that his marriage was annulled, but that does little to calm Mindy’s ire. So he works out a deal with Cliff: a divorce settlement with Christina in exchange for Danny’s authentic seat from the old Yankee Stadium (“Next to you, that’s the most valuable thing I own,” he tells Mindy, and later sobs as he hands it over — and that’s before Cliff reveals that he’s a Red Sox fan who’s just gonna light the souvenir on fire.)

The exchange’s real value comes when Cliff points out that Danny’s apartment is remarkably devoid of evidence that Mindy spends time there, something over which the dating docs have argued for the entire episode. So after telling her that finalizing his divorce gives him more time to focus on “my work and faith and you,” Danny gifts Mindy with a very girly, pink bureau in which she can keep her belongings at his place. And then they go have pressed-jeans-adjacent sex in his closet.

THE SADDEST OF SACKS | Lauren “puts a pin in” her relationships with both Peter and Jeremy, but after the INS threatens to deport the Brit (likely off a tip from a jealous Peter), the brain surgeon realizes that her feelings for Jeremy are stronger than she thought. So they take the pin out, while a dejected Peter watches.

WORTH A MENTION | The Mindy Project‘s throwaway lines are sometimes even more fun that the plot, so let’s not forget about: Mindy’s impassioned description of Sarah Palin, lending even more credence to the idea that Mindy is a raging conservative; Danny’s Marlon Brando impression of Mindy’s rear; Dr. L’s description of her personal brand as being a “sassy but bangable brat;” Danny’s description of the three things that kisses are for (“your ma, your girl and your wrestling coach after you win regionals”) and the repeated references to Danny and Mindy’s dirty, dirty sexy life (the wax museum?!).