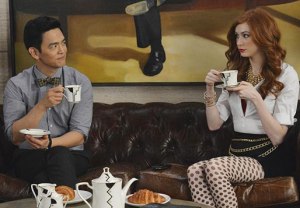 Eliza Dooley has no real friends. And frankly, it’s not hard to figure out why.

But as Eliza observes in the first few minutes of Tuesday’s premiere, “Being friended is not the same thing as having friends.” It’s a lesson she learns the hard way, after she tosses her cookies twice en route to a business trip — upon learning that her co-worker boyfriend is, in fact, married — then watches the gleeful Schadenfreude creep across her colleagues’ faces.

The comedy is based on My Fair Lady, Broadway’s hit 1956 musical, so it’s no surprise that Eliza turns to co-worker Henry (Sleepy Hollow’s John Cho) to get the image overhaul she so desperately needs. (Even though she has trouble understanding that it’s the inside that needs a makeover — not just the outside.) If Henry was able to rebrand a nasal spray that (allegedly!) caused Satanic hallucinations, repackaging Eliza should be a cinch, right?

Henry quickly realizes that Eliza has no interest in people other than herself — she doesn’t even know her office receptionist’s name! — her likes and dislikes are similarly vapid… but perhaps the most infuriating thing about Eliza is her tendency to run from her feelings. Case in point: When Henry attends his boss’s daughter’s wedding with Eliza, the gorgeous make-under she received from hipster neighbor Bryn immediately goes to waste. She conspicuously plays with her phone to avoid “the feels” the ceremony is giving her, and Henry informs her she’s a lost cause. (I would say ouch, but Eliza also brings the heat when she calls her mentor a “holier-than-thou, judgmental, hypocritical… coxcomb!”)

But it seems Henry’s lessons for Eliza haven’t all been for naught. When she finds herself taking a genuine interest in receptionist Charmonique, Eliza runs to Henry and tells him that his pointers are actually working — slowly, but they’re working all the same.

If you went into Selfie prepared for a wholly unlikable protagonist, Eliza Dooley gives you more than your money’s worth. But you can’t help rooting for her by the end of Tuesday’s half-hour — and the series premiere packs in plenty of laughs, to boot.

That’s what we think — but did you like Selfie? Grade the series premiere via our poll below, then hit the comments to back up your choice!