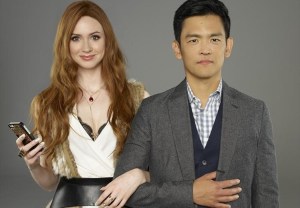 The stars and creator of ABC’s fall comedy Selfie were forced to do a little self-examination Tuesday during the Television Critics Association’s summer press tour, beginning with a defense of the show’s seemingly unlikable main character.

“We meet her at a place where she has her flaws intact,” executive producer Emily Kapnek admitted of Karen Gillan’s self-obsessed — not to mention social media-obsessed — Eliza Dooley, adding that John Cho’s seemingly perfect Henry is also not without his flaws. “This is just a jumping-off point. [The series] about the evolution of these two characters.”

The show’s title was also up for discussion, as many critics worry it will feel outdated as the series progresses. Kapnek said she doesn’t share their concerns.

“‘Selfie’ is a very provocative word,” Kapnek explained. “For us, it really speaks to the disease that Eliza has,” which is that she keeps the world at arm’s distance. “It becomes a descriptive word for us. It felt natural to keep it as the title of the show.”

As for why Gillan isn’t keeping her Scottish accent on the show — which is crazy charming, especially when she spouts Eliza-isms like “doof” — Kapnek said it was “important to the material that [Eliza] be American.”

Kapnek also joked, “I don’t find Karen’s accent all that convincing. People are charmed by it, but I feel like she’s in and out of it a lot.”

And get this: In order to hone her exaggerated American attitude, Gillan said she drew inspiration from “all the girls who went to Soul Cycle.” (Editor’s note: She nailed it.)

Fans of Kapnek’s recently cancelled ABC comedy Suburgatory also can hold out hope for those actors (not characters) to appear in her new world at some point.

“I’m absolutely in love with those actors,” Kapnek said. “If there’s an opportunity to bring them in organically, I’d love to.”