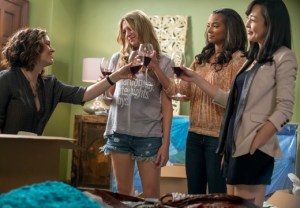 The forecast for Summer 2015 is steamy with a high chance of exposed man-torso.

ABC announced today that it has renewed its addictive sudser Mistresses for Season 3 — guaranteeing some resolution to the multiple cliffhangers faced by sisters Savi (Alyssa Milano) and Joss (Jes Macallan) and their close friends Karen (Yunjin Kim) and April (Rochelle Aytes) in the show’s sophomore finale.

The renewal comes a month after the show’s Season 2 finale — which aired on Labor Day — drew 3.5 million total viewers and a 0.8 rating, dipping a tenth in the demo week-to-week, but down 10 and 27 percent from its freshman finisher (which did not air on a national holiday). When we last saw the show’s four central protagonists, Joss had fled her wedding to nice-guy Scott and was locked in a steamy embrace with ex-brother-in-law Harry — while sister Savi unwittingly headed down to the beach where the verboten duo were crashing wave against shore (so to speak). Karen, meanwhile, learned she was HIV-negative — but then her doctor threw in a cryptic, “something else came up…” As for April, she’d learned that presumed-dead-but-secretly-on-the-lam-from-a-drug-kingpin ex-husband had been murdered (for real) — and then got the double whammy of having her pre-teen daughter Lucy learn the whole truth via local TV report. (Read the full recap here.)

Executive producer K.J. Steinberg told TVLine in August that the show’s writing staff “would never have written [the Season 2 finale] to be an ending to the series. We architected it for a Season 3. And we have hope that we will get one so we can continue to tell these stories and play out these dramas.”

Steinberg added that in the wake of Joss and Harry’s hookup, “Watching how the [four central] women are going to navigate it in terms of their friendship” would be “the centerpiece of Season 3.”

“How long does it take for people to forgive after a betrayal or a transgression? And how does that path to forgiveness happen?” Steinberg wondered. “That’s what I think is the interesting part and that’s going to be the dramatic part to watch — if the forgiveness thing ever happens. And God knows if Joss will ever forgive herself.”

Excited about this renewal news? Any ideas for Season 3 story arcs? Hit the comments with your thoughts!