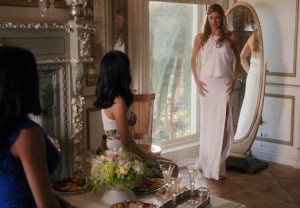 Warning: If you have yet to watch the Mistresses Season 2 finale, please skip this recap and head to another TVLine story. Everyone else, dive right in — the water is perfect!

Her long white gown flutters in the Pacific Ocean breeze. She runs to him, reckless and breathless, and God (or perhaps a really astute stylist) intervenes, making his tattered old t-shirt magically disappear, revealing a torso smoother and sturdier than the Quartz kitchen countertop of your home-design fantasies.

Suddenly, she is astride him — their lips locked, their hands intertwined, her hair looking like it’s ready for a starring role in an Herbal Essences commercial. The soundtrack swells. And then, as cruelly as the suns rays taunt her sinewy limbs when she forgets to slather them in SPF, the thought pops into her brain: “This dude was with my sister — in a Brad and Angelina on the set of Mr. and Mrs. Smith type of way — for like 15 years.”

There you have it: The central conundrum (though certainly not the only conundrum) of Mistresses‘ Season 2 finale. Without any further delay — we’re not Savi slowly trundling down that staircase to the beach, are we? — let’s recap the action for each of our central ladies, posing key questions (and holding firm to the belief that there will indeed be a Season 3)!

KAREN | Karen simply cannot catch a break: Not only does she have to listen to a Muzak version of “This Is It” on hold at her doctor’s office, but then the nurse comes back on the line and is all, “Oh, you need to come in and retake your HIV test because the first blood sample got contaminated.” Nurse, pleeeeease! I mean, Karen’s still trying to scrub Sam Grey’s blood stains out of her memory bank (and her ice-blue chaise lounge): She does not have time for this kind of foolery. Slipping into a spiral, Karen goes to her hot hookup Ben’s house, slaps him across the face, and then admits, “Everything I’ve done to find love, everything I touch, it all ends in death.” The next morning, she is the human embodiment of the “where does depression hurt?” pharmaceutical ads, blank-eyed on the couch, empty wine bottles all around her, possibly… contemplating suicide? But before she can make a rash decision, the phone rings, and it’s bubbly patient Anna, who shares something profound: “You saved my life — more times than you know.” It’s almost as if the Psychiatrist Formerly Known as Dr. Kim has been touched by an angel, and the knowledge that she’s had a profound positive impact in the world lifts her spirits. She heads to Joss’ engagement party and then gets an inconvenient call from her own M.D.: “You’re HIV-negative, but something else came up…” Could it be… Satan? (I kid! I kid!) Our hapless gal is probably/possibly preggers. Should we call Child Protective Services now, or give old girl the benefit of the doubt?

Key Questions: I know the Anna storyline is seemingly resolved and that we’re leaving Karen in a happier place, but is anyone else bummed we didn’t get a cray-cray Single Asian Female story arc? Also: Raise your hand if you miss Elizabeth “In! My! Hand!” Grey? I guess that’s my way of saying that if this is the Series Finale — I’m glad Karen has found some peace of mind. But if we get a Season 3 — don’t give us a pregnancy. Give us something else that will set us off on an entirely new course of crazy!

APRIL | April discovers during her final (and kinda victorious) meeting with the FBI that Daniel got fired from his job with the bureau. (Side note: Despite him being officially done with Savi, perhaps our ladies should keep Dom on retainer — seeing how their legal woes seem as reliable as the candle section at Maison Sue Mer, no?) Speaking of Daniel, however, he shows up at our home-furnishing goddess’s door and warns her that, because the FBI is no longer working with her, “April, you in danger, girl!” (He says it sexier, because he’s played by Ricky Whittle, OBVS.) They take adorable Lucy and retreat to a secluded cabin in the woods. After Lucy goes to sleep, April unbuttons her salmon silk pajamas and Daniel whips out his glock (definitely a euphemism). Cue Anita Baker’s “Sweet Love” — at least until morning, when somebody at FBI HQ lets Daniel know that April’s ne’er-do-well ex Paul has finally wound up dead (and that his dangerous drug-dealer nemesis bit the bullet — literally — as well). At Joss’ engagement party, April expresses her guilt about not letting Lucy in on the secret about her presumed-dead dad, but Karen (at last!) offers good counsel: “She’s a happy kid with a beautiful memory of her father that’s in tact.” In other words, count your blessings while you count whether Daniel’s got an eight-pack or a twelve-pack, sister! Just when April looks poised for Happily Ever After, though, Lucy sees a report on the local TV news — for once, not running a “dangers in your medicine cabinet” segment — and learns that Daddy Dearest wasn’t dead all these years, but is actually dead-dead now. And she’s furious with April for keeping it on the down-low. Oh noooooo!

Key Questions: Is there any saving April-Daniel? If not, is there any way we can have a Web series featuring Daniel doing “abstract acryllic painting on a body-sized canvas” for 13 episodes per summer? It can be solo work, with male subjects, with female subjects, I don’t care. Just make sure he starts in a Henley and ends with his second-to-none “brushwork.” (I don’t even know what that last sentence means, to be honest, and yes, I apologize.)

SAVI (AND HER MONOCHROMATIC DREAMCOAT) | Savi tells Karen about her flop of a date with Zack — but the higlight is Karen’s amazingly comical, “Were you wearing a helmet?!?!” The moral of the story, though, is not Yunjin Kim’s sitcom potential, but rather, Savi’s admission that, “I had a flash and I flashed on Harry.” (Again: Karen Pulling to the Curb FTW!) Savi uses her super-sudden realization that she’s not over her ex to pay him a home visit — and winds up having to take him to the emergency room when he gets his hand caught in a window. She misinterprets his accepting her invitation for a drink as a sign that he’s been playing Dolly Parton’s “Old Flame (Don’t Hold a Candle to You)” on repeat, and heads to Joss’ engagement party with an extra pep in her step — and a hilarious appetite for nom-noms that brought out the zany best in a writers’ room dealing with its biggest star’s pregnancy. (“I can’t! It’s too much! I need another tartlet!” Savi says, witnessing Joss in her wedding gown. #Priceless) Not so priceless? Savi heading down to the beach — looking for missing Lucy — at the exact moment little sis is about to go in flagrante deliciouso with L.A.’s hottest chef (ake her ex-hubby).

Key Questions: Does Savi really and truly want Harry back, or is her emotional rudderlessness causing her to seek out old comfort zones (rather than to seek new and uncomofortable vulnerabilities within)? And obviously, the bigger bombshell is this: Once Savi sees that surf-and-oomph moment between Joss and Harry, will she ever be able to get back to the sweet sisterly chemistry with her little sister again? (God, I hope so! I love those gals and their chemistry more than almost anything on the TV!)

When Joss finally arrives the following day to say she’s quitting her job and that Harry need not apologize because he crossed a line with his “you mean nothing to me” cruelty, he agrees “there are no words” — and lays a massive kiss on her lips instead. (I’m just going to make you feel better by telling you that you were not alone in hoping for such a salacious act since the Season 2 premiere.) This leads to a scene that could be the backdoor pilot for a new comedy called Boilermakers With Karen — and finds our erstwhile psychiatrist again asking the tough and pertinent questions: Does Joss have feelings for Harry? “I can’t,” she replies — and Karen notes that’s not exactly an answer.

Before we flash-forward to a round of sex on the beaches, however, we must observe that Scott (who doesn’t know how to use the phone, apparently) shows up at Harry’s house again to discuss his idea for turning the engagement party into a surprise wedding. Harry’s advice — that Savi, April and Karen “can’t keep a secret, but they will show up” shouldn’t be news to anyone who’s reached ’til-death-do-us-part status with Joss, but Scott has his foot on the pedal and can’t seem to locate the breaks. He even dangles “Grandma June’s mortality” in Joss’s face to get her to surrender her distaste for “a catered cage match” for their relatives. And because she’s going to be a Serious Engaged Lady, Joss goes and does the right thing, returning to Wunderbar and breaking off her friendship with Harry. “We’ve gotten really close and it’s confusing for me, too,” she says, as tears begin to streak down her face. “We can’t be friends anymore, OK?” It’s a heartbreaking moment — and a really teastament to Jes Macallan’s strength as an actress — and just when I’m debating whether this is a one-Kleeenx or two situation, we get this exchange:

Harry: Joss, have fun at your party.
Joss: I’ll post pictures.
Harry: I’ll be sure to look.

At the Malibu party house, Scott has thought of every detail — “By laid-back, I think he meant you lay back and let the servitude wash over you,” Joss jokes to Savi — except for giving security a picture of Harry and telling them to smash his gorgeous Austrailian face into the pavement if he pulls up, full of Australian beer and romantic notions. (I really worried he was going to get into an accident, or at least get stopped for DUI. Was that just me?)

Joss puts on her Brave Bride Face (™) and almost has me convinced she’s excited… and then she asks Savi if she’d ever mentioned her late dad’s old record collection to Scott. Big sis says no. “Neither did I,” Joss trails off — and she knows that Scott’s sweetest engagement gift to her was a Cyrano de Bergerac-style ruse, and that the man who knows her and loves her best is an Australian with a big ego (but a perfectly proportioned nose). She spies him from her balcony, runs to meet him at the beach, and when he tells her there actually are words for their situation — and those words are “I love you” — she hurls herself at him like a dolphin to a piece of mackerel. The kiss is everything you want it to be — except that Savi is headed down the steps and right toward their top-secret, shielded-by-a-very-shallow-rock-formation rendezvous spot… But before worlds/sisters can collide, the credits roll.

Key Questions: Did Joss do the absolute right thing, the absolute wrong thing or somewhere in the middle in reciprocating Harry’s feelings? How amazing has Jes Macallan been these last few episodes? Can the Savi-Joss dynamic be saved? Can the Joss-Harry romance work at the same time? Would you have been able to plunk down on a beach full of wet sand in couture bridal wear?

And lastly, what did you think of Mistresses’ Season 2 finale? Sound off in the comments!