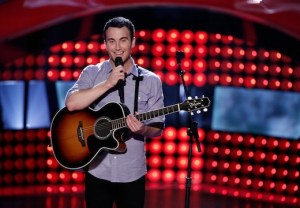 You know when your restaurant table has a wobbly leg and the waiter promises to fix it, but no amount of wadded-up napkins or coasters or old baguette can seem to even things out? That’s kind of how I felt about most of the performances from Night 3 of The Voice‘s Season 7 Blind Auditions.

Something was amiss — and not just with the ears of our four coaches, who turned their chairs with the brazen indiscriminateness of Golden Retrievers snatching dropped foodstuffs from a toddler’s high chair.

RELATED Dancing With the Stars Week 3 Results: Did The Right Couple Go Home?

Too many runaway runs were rewarded, too many swallowed words were ignored, too many crimes against intonation were left unpunished. But then again, considering the carnage to come in the Battle Rounds, maybe Blake, Adam, Pharrell and Gwen took advantage of the two-for-one sale on cannon fodder.

Which isn’t to say we didn’t get one or two happening hopefuls. That reggae returnee was sublime, and the wannabe comedian who got only Gwen to turn was better than I’d expected he’d be. So without further ado, let’s count down the nine vocalists who advanced tonight to the Season 7 Battle Rounds — in order from least- to most-promising.

9. Jessie Pitts, “The Story” (Team Gwen) | Blake compared her voice to a bowl of Lucky Charms (marshmallows only). But Jessie’s off-putting melodic choices and stilted phrasing pegged her as a Caroline Pennell knockoff moreso than an artist who’s destined for the live shows.

8. Blessing Offor, “Just the Two of Us” (Team Pharrell) | No doubt, Blessing’s got charisma — and his positivity in the face of losing all vision at age 11 is inspiring. But there were moments in the opening two-thirds of his audition where I legitimately couldn’t tell if he was attempting some kind of experimental jazz riffing or if he’d just lost control of the tempo and melody. By the time he finished, I was pretty sure it was the latter.

7. Ricky Manning, “Love Me Again” (Team Pharrell) | I have all the trust in the world in Pharrell, so I’m going to assume I missed something when Ricky’s voice struck me as thin and indistinct. Ricky’s lack of breath support on the verses, however, is a certainty that cannot be denied.

6. Mia Pfirrman, “Unconditionally” (Team Adam) | Fits the “Generic Diva Belter” profile that never who’ll probably get booted on the first night of public voting. Yeah, she hit some really impressive notes on Katy Perry’s least interesting ditty, but there was zero personality in her delivery — and the hard ‘R’ sound she made on words like “yourrrrr haaarrrrrrrt” was supremely vexing.

5. Kelli Douglas, “Danny’s Song” (Team Adam) | Gwen was right that Loggins and Messina’s ’70s-era folkie — a big moment for The Swon Brothers in Season 4 — was an interesting, unexpected choice for Kelli. But the uncontrollable nerves that threw off her pitch in the opening verse never really subsided — making her eventual three-chair turn a head-scratcher, despite an undeniably pretty tone.

4. John Martin, “Sweet Pea” (Team Blake) | Forklift operator by day, but with a face so pretty and a swoop of hair so perfect it’d make Harry Styles envious. Alas, though, John’s choice and delivery of “Sweet Pea” was so twee, so clearly calculated to melt hearts and influence future voting patterns, that it lacked a certain sense of authenticity and connectedness. He’s not a bad singer, and his falsetto flourishes were solid, but I can’t say I’d be crushed if he was eliminated montage-style in the Battles.

3. Bree Fondacaro, “It Ain’t Me Babe” (Team Blake) | Bree’s tone was so husky on this classic Bob Dylan jam, it probably could’ve pulled an Iditarod sled. (Sorry, that joke was terrible.) Yet while her nerves shone through in places and caused her voice to tighten up a bit too much, at least she wasn’t un-interesting, right?

2. Troy Ritchie, “Out of My League” (Team Gwen) | Troy’s overzealous Family Guy impressions and insistence on wanting to be an “entertainer” set me on edge before he’d sung a note. But the croaky tone he displayed on Fitz and the Tantrum’s rhythmic hit — combined with a vocal versatility that carried him from spot-on falsetto to straight-ahead belting — immediately turned my first impression on its head. Bonus attribute: No excessive/showy runs!

1. Anita Antoinette, “Turn Your Lights Down Low” (Team Gwen) | Anita’s failure to get a chair to turn in Season 3 was a heartbreaker — especially when she nailed an a capella moment right after she’d been eliminated. Flash forward four seasons later, and it was clear the Berklee graduate had spent the interim honing her craft, perfecting her pitch and learning how to caress a lyric in a way that’s both heartfelt and polished. If Gwen proves to be a more astute song selector than, say Shakira and/or Cee Lo, Anita could actually be a contender!

On that note, then I pass the mic to you. Who were your favorites from Season 7 Episode 3? Were you bummed out by the overall quality of the auditioners — or am I just being too picky? Take our polls below, then sound off in the comments!