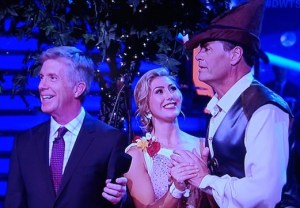 After two not-exactly-surprising celebrity heave-hos kicked off Season 19 in ho-hum fashion, Week 3 of Dancing With the Stars found our remaining 11 celebs getting high… on Hollywood.

DANCE OF THE NIGHT | Janel Parrish and pro Val Chmerkovskiy: In an electrifying, wildly entertaining jazz dance to the West Side Story classic “America,” Janel’s impeccable footwork, style and exuberance brought the ballroom (and the judges) to their feet. Julianne could barely contain her delight, exclaiming, “What just happened!? I felt like I was watching a full-on Broadway show.” “This is your star-making turn!” gushed Bruno, while a tongue-tied Carrie Ann blurted out “That was insane!” Kevin humbly declared, “I bow down.” Janel’s cheeks were covered with joy-soaked tears after the judges showered her with a quartet of well-deserved 10s.

RUNNER-UP FOR DANCE OF THE NIGHT | Bethany Mota and pro Derek Hough: Encouraged by Derek to “attack” their jazz dance to “Singing in the Rain,” Bethany – who handled that umbrella with Gene Kelly-esque deftness and precision – sent a serious message: She’s a definite Mirrorball contender. Julianne gave Bethany props not only for her dancing but her courage, saying, “I know the wrath of Derek … well done for taking that upon you…You literally didn’t miss a step!” But perhaps Carrie Ann summed it up best: “Mission impossible, mission complete.” The dance earned the season’s second round of all 10s.

MOST CRIMINALLY UNDERSCORED | On a mostly mediocre night when the 7’s and 8’s dominated the scoring, everyone pretty much escaped the undeserved brutality this week.

WORST OF THE NIGHT | Michael Waltrip and pro Emma Slater: In an uber-stiff waltz set to the Robin Hood theme “Everything I Do, I Do It For You,” Michael’s iconic pointy hat had to be the highlight. Yes, the hat. Sure, Julianne gave Michael an encouraging post-dance hug (“that was so technical … that was your best dance ever”) but Bruno rightly asked for “a bit more flow the next time” and Carrie Ann reminded us “there’s a lot to work on” for next week. The dance earned (generously) a quad of 7s from the judges.

“Well, I’m happy, it’s been a great experience. I put myself out there and tried something new. It’s been fun,” said Courture.

And with that, it’s your turn. Which couple should have really gone home tonight? Or was it truly Randy’s time? Sound off in the comments!