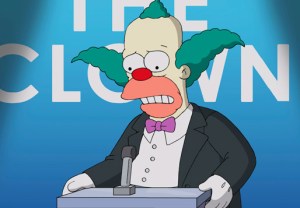 As promised, The Simpsons‘ 26th season premiere saw the highly anticipated demise of a “beloved” Springfield resident on Sunday.

So now, we gather here to mourn the loss of Krusty’s father, Rabbi Hyman Krustofsky (voiced by the great Jackie Mason), who’s been a part of the Simpsons universe since reuniting with his estranged, red-nosed son in 1991.

Let’s begin with what I’m sure is the first question on all of your minds: Why Krusty’s dad?

“I just thought it would be a good story about someone who’s had a tough relationship with his father — having Krusty’s father die without him ever getting that warmth or connection he really wanted, then finally finding it in a surprising way,” executive producer Al Jean explains to TVLine. “If we could get a sweet moment out of that, that’s all we wanted. We didn’t want a crazy death, or anything shocking, just true human emotion.” And even though The Simpsons doesn’t serialize things too often, Jean acknowledges that Krusty’s father’s death is likely to have an impact on the character moving forward.

“One of the reasons Krusty’s been such a loose cannon is because his father disapproved of him, and he never felt like he got that sort of love that he wanted,” Jean says. “He might have a little more confidence now that he has that. … A little more.”

But fear not; despite this highly publicized death, Jean says the show is not going to go on a stunt-killing spree. In fact, as long as The Simpsons team is putting yellow pen to paper, your favorites are safe.

“We’re never going to kill off Homer, or even Krusty,” he admits. “This show is always running in syndication, and we don’t want you to feel bad every time you see an old character that you loved. … Totally inadvertently, and very sadly, now whenever I see Mrs. Krabapel [her portrayer, Marcia Wallace, passed away in 2013], I’m always a little sad, where I never was before.”

So… Were you surprised by the season premiere’s big death, or did you already guess the victim? Grade the episode below, then drop a comment with more of your thoughts.