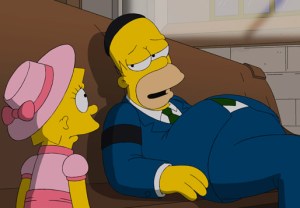 In less than 60 hours, one Springfield resident will be joining Bleeding Gums Murphy on that big storyboard in the sky. So, who’s taking their final bow on The Simpsons‘ season premiere this Sunday (Fox, 8/7c)?

“I’ve done everything I can to temper any disappointment by saying that, although the press is claiming this is an ‘iconic’ character, we never said that,” executive producer Al Jean explains to TVLine. “We just said it’s a ‘beloved’ character. I think it may have become overhyped, though I’ve never heard the term ‘underhyped’ before. Either way, it’s an emotional story, and it’s one we’re really proud of.”

Jean says the buzz really kicked up when he started giving out clues, hinting that the dearly departed will be a character played by an actor who won an Emmy for said portrayal.

“The next thing I knew, it was on newspapers in Uruguay,” Jean says with a laugh. “It was insane, but once that happened, we thought, ‘OK, how can we take advantage of this thing we didn’t mean to start?'”

And when producers announced the title of the episode, “Clown in the Dumps”? Forget about it.

“People went, ‘You’re killing off Krusty?!'” Jean recalls. “I was like, ‘No. ‘In the dumps’ just means you’re sad.’ It was mostly people running around, jumping to their own conclusions.” (Side note: Per the official episode description, Sunday’s premiere begins with “Krusty’s decision to retire after he’s offended by a comedy cable channel roast of him,” hence the title.)

Regardless of how overhyped the death may be, a Simpsons character is definitely meeting his (or her) end this Sunday, and while that character “isn’t going to come back from the dead,” Jean says it’s entirely possible that they’ll “live on in [a certain character]’s memory.”

So, Simpsons fans, who do you think is being killed off? Browse photos from the premiere below, then drop a comment with your best guesses.