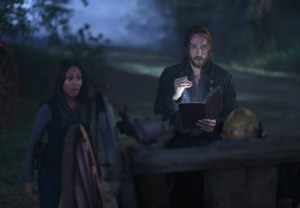 In this week’s episode, Sleepy Hollow does something very smart by having Katrina choose to stay with Abraham rather than flee with Ichabod.

This is a welcome move for a couple of reasons. For starters, it’s fun to watch the series zig where we expect it to zag; Ich’s been trying to free his wife from enslavement for a season now, and when he finally gets to her, she says, “Thanks, I’m good”?! But on a deeper level, Katrina’s decision raises some important questions the Fox drama can have a great time answering in subsequent installments.

RELATED Fall TV Spectacular: Exclusive Scoop and Photos on 42 of Your Returning Favorites, Including Sleepy Hollow

Is Katrina truly jealous of Abbie? Is she really against Abraham? Or is the redhead’s history of deceit — regardless of the motive behind it — a prequel to the kind of deception that could completely undermine the Witnesses’ work?

Maybe Katrina is exactly what she says she is: a loving wife who’s sacrificing her own freedom and happiness in the name of stopping evil from gobbling up the world. It would be a perfectly respectable, albeit slightly snooze-worthy, way to flesh out Katia Winter’s character.

Forgive me, but I’m hoping Katrina’s more complex than that; if you buy into the idea that Ichabod is the kind of man who admires and values Abbie’s intelligence and heart, you want to think that the wife for whom he pines would have those same qualities in spades. So here’s to her having her own agenda, whatever it is, and showing us what she’s truly made of.

Also in this week’s episode: Team WTF meets the new sheriff, Irving reappears and there’s a giant monster on the loose… yet no one seems bothered about it. Read on as we discuss “The Kindred.”

TERRIBLE DREAMS ARE MADE OF THESE | We come into the episode as the Horseman of Death is tying Katrina to some posts and preparing to make her exactly like him. Losing her noggin will bond them for eternity, a nearby Henry tells her, and just as Headless strikes the fatal blow, Ichabod startles awake in the archives: He was having a nightmare. But the ritual about which he dreamed is a very real threat for his wife, he tells Abbie, citing a lost gospel of the Bible and getting very antsy that they haven’t yet located his other half.

Abbie’s all, “Slow your roll. We kinda know where he is, and you knew him before, so make like Street Easy and show me some places Abraham would’ve liked to live. I’m going to go pretend like I still do the job for which I am paid.”

She leaves to meet the new sheriff, Leena Reyes, a former Border Patrol officer who worked a previous stint in Sleepy Hollow and responded to some domestic calls at the Mills house when Abbie was a girl and her mom was nuts. “We are gonna bring some sanity back to this town,” Reyes vows. She seems nice but not too nice, capable, strong and professional. She must be some sort of demon! (Side note: These first 10 minutes or so are very heavy on the exposition. I’ll allow it for now, Sleepy Hollow, but that’s what the “Previously, on Sleepy Hollow” is for.)

HOUSE HUNTERS | Ichabod has deduced that Abraham likely is camped out at his family’s old estate, a mansion in what is now Dobbs Ferry, N.Y. On the way, Mills reminds her partner that their primary goal is to stop Moloch… not to recover Katrina from Headless’ clutches. Ichabod counters that his wife is a powerful witch who could greatly help their cause — plus, he has a duty to her that rivals his duty as a Witness, and “I intend to honor them both.”

Still, when they find the red-eyed horse outside the house and ascertain that Katrina and the Horseman are in residence, Abbie has to bodily remove Ichabod from rushing in to save his wife. They meet up with Jenny at the cabin for a strategy session, where they agree (Abbie’s a holdout, but not for long) to raise The Kindred, a Frankenstein-like creation originally stitched together by Ben Franklin — save the head, which is necessary to slay the Pale Rider. Good thing they have Abraham’s old skull hanging around! (Side note: Of the many great Abbie-Ichabod exchanges in this episode, I really liked her “This is insane!” followed by his “So much of my life can be characterized under those auspices.”)

SOWING THE SEEDS | So Abbie visits a very beat-up Irving in jail and then, off his info, takes her partner to pick up the head from a safe-deposit box at a local bank. Ichabod is overwhelmed at the institution, and rails against (in no particular order): pens on chains, how ridiculously easy it is to get a credit card in modern America and the insinuation that he and Abbie are a couple. (Heh.)

Funny that should come up, because Abraham at that very moment reminds Katrina that her dear husband let her languish in Purgatreeeeee for a really long time but hauled his skinny colonial butt to get his fellow Witness out of there in a matter of hours. “You’ve seen it,” he taunts her, causing Red to look troubled as she flashes back to that moment in the season finale that I didn’t re-watch a thousand times this summer or anything.

IT’S ALIVE! (KINDA) | While trying to recover some ammo for their assault on the house, Jenny gets caught by Reyes and — in order to deflect the sheriff’s growing curiosity about exactly what’s going on in the archives — takes one for the team by saying the weapons are hers and then going to jail for a while.

Meanwhile, Abbie and Ichabod use Franklin’s sketchbook to find The Kindred in a heretofore unexplored section of the catacombs. Apparently, Crane is really jonesing for another heartbreaking tunnels talk, because he gets Abbie to chat about how close she was to letting Purgatory get the best of her — and that she almost drank from the Fakechabod’s flask because she was so relieved to see her friend. “That’s what scares me: My faith in you is my greatest weakness,” she tells him, hinting that his feelings for Katrina are what will do him in. (Side note: I’d argue that Ich’s feelings for Abbie could also be a soft underbelly through which Moloch could rake his evil talons. Thoughts?)

Their heart-to-heart is interrupted when they find The Kindred, a giant patchwork of a monster they eventually complete with Abraham’s head. (Side note: Abbie, don’t you maybe want to wear some gloves as you handle the cranium of destruction?) Ichabod dramatically recites an incantation that’s supposed to bring The Kindred to live… but doesn’t. (Ha!) The second try works, and soon the creature is battling Headless and a Henry-directed Horseman of War as Ichabod sneaks in and frees Katrina.

Except the witch won’t go. The Cranes share a fervent kiss, but Katrina informs her husband that if she leaves with him, Abraham will destroy the world in his attempt to take her back. But if she stays, she can act as a mole and funnel information to Mills and Crane (and try to save Henry). Ichabod is really, really not OK with this plan but, when Abbie tells him they’re out of time, he’s forced to leave with a whispered, “You are forever in my heart!”

I OBJECT! | At the cabin, Abbie and Ichabod share some tea and “take the victory,” despite the fact that they have no idea where The Kindred is in the wake of its battle with the Horsemen. They might not be so quick to accept victory, though, if they knew what was going down at Tarrytown Psychiatric: Henry, who’s a lawyer (?!), arrives at Irving’s room and announces that Cynthia has retained him as the sheriff’s new counsel. Because Abbie chose not to burden her former boss with the news that Henry = Jeremy = War, Irving has no idea that his life — which he’s signing away via blood, thanks to Henry Parrish’s Pen o’ Pain — is about to get a whole lot worse.

Now it’s your turn. What did you think of the episode? Was there any way that Irving’s choice to tell the truth about Ancitif would have worked as a defense, even before Henry showed up? What’s your take on Katrina’s motives? Is Jenny rapidly becoming the most get-stuff-done member of Team WTF? Sound off in the comments!