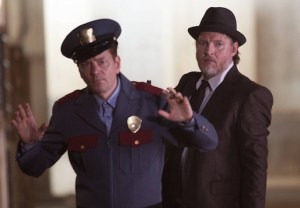 And while the series premiere was generally strong and indicated promise, this week’s episode, “Selina Kyle,” unfortunately fell into the first category.

Make no mistake, I can enjoy a police procedural (which, let’s face it, this show will more often than not need to be). But in such a scenario, I need to see the detectives be uniquely clever and/or intuitive — and the bar has been set high by the likes of the hyper-observational Sherlock Holmes and Patrick Jane, even the Major Crimes team. And save for realizing that a doodled fork was in fact a trident, Detectives Gordon and Bullock didn’t exactly crack this kidnapping case wide open.

And then you have our first foray into weekly villains. As played by Lili Taylor and Frank Whaley, Patti and Doug were more broadly comical than I had been expecting from Gotham; Patti in particular almost struck me as an animated Scooby-Doo baddie. In fashioning one-off villains, will Gotham be more evoking the early, lighter Batman movies, or alternating between the broad and the truly fearsome? Or does broaching the latter risk undermining the threat of Penguin and Fish? Speaking of….

While Robin Lord Taylor has instantly made Oswald a compelling cretin (and Carol Kane is spot-on as his doting momma), I wonder if the show is placing too much stock in Fish Mooney, at least in terms of how invested we are in her as a recurring foil. Would you rather see Gordon ultimately take down Fish, with her breathy, diva-like taunts, or John Doman’s more traditionally intimidating Carmine Falcone? On the flip side, the bits and pieces we get with young master Bruce (played by David Mazouz) thus far have been interesting, every one of them hinting at his destiny, and it’s an interesting spin to show Sean Pertwee’s Alfred at this early stage fumble through the grooming of his charge, toggling between overly gruff and desperately reassuring. (Knowing how he and Gordon will one day be the No. 1 confidantes of a caped crusader, it’s fun to see them often butting heads here on the series.)

Something to ponder: It was mentioned that the Waynes, prior to their death, were aiming to finance the reopening of Arkham Asylum, which on the series has been shuttered for a while. Could that have been a motive for murder?

For an episode named after her, it was a bit of a tease to barely see Selina until midway through the hour, and not hear her first speak until a bit after that. But when she is on screen, Camren Bicondova ably presents the potential for the complex character Catwoman one day will be, boasting much pluck and great swag. Now that she had dropped hints at new intel about the Waynes’ murder, her dynamic with Gordon should become another draw for viewers.

What did you think of Episode 2? Also: Watch this new trailer for Season 1:
https://www.youtube.com/watch?v=bzUJDmjBPuQ