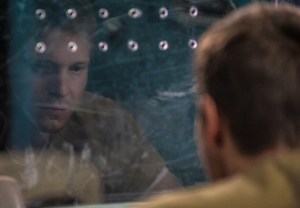 At least once a week on The Price Is Right, you can see a beautiful woman run her hand across the back of a chair and not feel a thing (aside from “What is the actual retail value?”).

So with that in mind, let’s all bow down to the incomparable Christine Baranski for injecting such palpable wistfulness into the very same mundane act on this week’s installment of The Good Wife.

Indeed, as Baranski’s Diane Lockhart bids farewell to her meticulously appointed office, then offers a barely audible “goodbye” as she boards the Lockhart-Gardner elevator one last time, it’s clear she is also letting go of her professional connection to the late Will Gardner, a partner and friend who’d been violently ripped from her life only a few months prior. (Please pass the Kleenex, and thank you.)

But don’t cry for her, Lockhart-istas! Diane’s exit from the firm she founded 13 years ago turns out to be much more of a victory march than a retreat. And that’s because while she was convincing Taye Diggs’ Dean Levine-Wilkins to fly the coop with her, he was rounding up six additional Lockhart-Gardner department heads to make the leap to the Lawyers Without Doors, LLC. (Wait — that’s not the slogan on the Florrick-Agos business cards?)

Crazier still, Diane’s exit isn’t necessarily the top story of Season 6, Episode 2 (“Trust Issues”). We’ve got a full-fledged cliffhanger in which Kalinda is holding another man’s life in her hands, a development in which the entire universe is trying to tell Alicia to say “yes” to the mess that is the State’s Attorney’s office and another week in the horror film called Cary Behind Bars. Read on for the full recap…

THINGS REMAIN SCARY FOR CARY | Alicia gets called to the stand as Finn Polmar continues to question the source of Cary’s bail money from Dexter Roja (aka the frontman for drug dealer Lemond Bishop’s legit businesses). When the dashing ADA is able to prove that the Roja’s gyms are largely fueled by memberships “purchased” by Chicago’s recently deceased, he not only succeeds in helping the fitness company with a killer new slogan (“people are dying to work out here!”) but also gets the judge to agree to a subpoena for Bishop’s testimony. And just like that, the $1.3 million in bail money is off the table.

Meanwhile, Bishop agrees to let Kalinda question the three crew members for whom Cary allegedly laid out plans on how to smuggle $1.3 million worth of drugs into the country — “and how to sell it without getting caught.” The guys cop to nothing more than discussing hypothetical movie plots (while Cary, from his jail cell, staunchly maintains his innocence). Kalinda admits the prosecution’s tape could’ve been altered, but she also matches one of the crew member’s voices (Trey, to be exact) to the incriminating tape Sophia played for her in the Season 6 premiere. She doesn’t tell Bishop, for fear he’ll have the snitch killed, but her noble plan backfires when Bishop has silver-toothed Jim Lenard (who’s not guilty!) whacked. “We can’t lose another witness,” Kalinda tells Bishop, knowing there’s a one-in-two chance Bishop might put a hit out on Cary’s last remaining lifeline to win his case. “Tell me who Cary needs,” Bishop replies, before the action cuts back to Lockhart-Gardner. Will Kainda sacrifice the life of turncoat Trey to free Cary, or is there a line she won’t cross even for the man she loves (or at least lusts after)? We’ll find out next week – hopefully!

POLL DANCING | Senior White House adviser Valerie Jarrett cold calls Alicia and encourage her to run for State’s Attorney — but our protagonist, while flattered, can smell Eli all over the phone. When a real estate tycoon shows up at her office with Cary’s interest-free bail money, Alicia rejects him too — saying it’d be unethical — at which point Robyn makes an astute observation: “The only reason to reject it is if you think it’ll hurt your campaign.” Wait? Is Alicia softening to the idea of running?

Peter clearly has a possible state’s attorney’s run for his estranged wife on his mind, too, as he refuses to sign papers for a second mortgage on the apartment to help Alicia raise Cary’s bail money. When she angrily tells him the man she married would’ve done the right thing, he’s quick with a retort: “The woman I married never would’ve asked.” (I’d like to ask the woman he married to come hang the artwork in my apartment; that wall of paintings behind her dining-room table is as masterful as it is complex!)

“There’s no wrong I want corrected! There’s no mountain I want to climb!” Alicia finally tells Eli, after a reporter asks her about leaked poll results testing her possible negatives in a campaign. But while he finally convinces her the current state’s attorney must be behind the numbers — oh Alicia, still too trusting! — he confesses to Peter that because Alicia “wasn’t listening to surrogates,” he went ahead and created “enemy surrogates!” You can’t fault the guy on enthusiasm, can you? MUTINY ON THE CANNING-LEE | It looks as though Dean might not make the leap with Diane after visiting Florrick-Agos (under construction since 2013!) and having Robyn cluelessly describe it as “a funky coffee house.” But after some serious thought, he rejects more years spent chasing the “predictably attainable” and chooses the firm that allows a homeless man to shower in its bathroom sink. Florrick-Agos’ partners vote 10-5 to accept the newcomers — though my first question is whether Alicia and Cary will keep on Robyn now that Diane has apparently cleared the deal-breaking hurdle of bringing Kalinda with her. (If they fire the chipper blonde investigator after she pledged her entire savings to Cary’s bail, there’ll be no forgiveness from this couch!) Secondly, should straight, white Cary be nervous about Diane’s repeated references to the new firm as a place run by women and people of color? (Not that it’s mutually exclusive, but given their history — and his recent legal troubles… I had to ask.) An advance from Chum Hum allows Florrick-Agos to post bail for Cary — leading to the very first Florrick-Agos (the people, not the firm) hug…ever! (Yes, I teared up.) Diane, meanwhile, leads Dean and the mutinous LG folks to the elevator — a powerful, emotional exit that calls back (and completely flips) Alicia’s disgraced “perp-walk” with security guards from “Hitting the Fan,” no?

CHUM-HUMMING ALONG | Percolating in the background, a class-action salary-fixing lawsuit against Chum-Hum that briefly threatens Florrick-Agos relationship with its top client. With an assist via prison phone from Cary, Alicia and Carey Zepps get the win — and defeat opposing (and smug) attorney Lorraine Joy (the woman who once passed on hiring a much greener, much more fragile Alicia) in the process. “I should’ve hired you,” she says with admiration. “You’re an assassin.”

On that note, what did you think of The Good Wife Season 6 Episode 2? Will Kalinda rat out the rat? Will David Lee’s head explode when he finds out how much money just walked out the firm’s door? And did you tear up during Diane’s exit, Alicia and Cary’s hug, or both? Sound off in the comments!