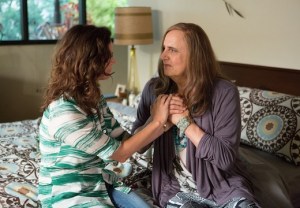 THE EPISODE | “The Letting Go”

Those are just few of the adjectives that spring to mind watching Jeffrey Tambor (Arrested Development, The Larry Sanders Show) completely disappear into the role of Transparent‘s Maura Pfefferman, a transgender woman coming to terms with her identity after 70 years of living as a man (and fathering three children in the process).

RELATED Jeffrey Tambor: Amazon’s Transparent Is Part of a Civil-Rights ‘Revolution’ (and Funny, Too)

Episode 2 of the series opens with Maura (whose gender transition remains a secret to her family) arriving home and dressed in women’s clothing — only to find her married adult daughter Sarah (the equally remarkable Amy Landecker) and ex-girlfriend Tammy (Melora Hardin) are using her bedroom for an illicit makeout session. As the shockwaves of Maura and Tammy’s discoveries settle in, Tambor makes completely believable and utterly hilarious the way Maura almost unconsciously settles into nonchalant parent mode. “It’s been a while,” she says to Tammy. “How’s mom and dad?”

With Sarah struggling to comprehend what she’s seeing, though, Maura sits her down on the bed and begins a heartbreaking confession of a life lived in the wrong body, in an era where being her authentic self had never been an option. When Sarah briefly interrupts, Maura erupts with exasperation — “Please, God, let me do this!” — and you can feel the urgency to finally share her story and the panic setting in that she might lose the courage to do so. At first, Sarah wonders if her dad is going to “dress up like a lady all the time.” Tambor’s rueful laugh betrays Maura’s seven decades of hiding in the shadows. “My whole life I’ve been dressing up like a man,” she replies. “This is me.”

Maura’s fledgling freedom is juxtaposed beautifully with almost wordless flashbacks to her life in 1989 — when she was living as a male political-science professor who could only acknowledge growing feelings of gender confusion in a darkened office after hours. Watching Tambor gently thumb a brightly colored silk blouse, and then later, slip it back into a shopping bag and discard it in a hallway trashcan, you can feel the loneliness of a human being acutely aware that no one will be able to comprehend the truth of her life story.

Maura, of course, is only at the start of her journey in Transparent‘s first season, and Tambor imbues her with a sometimes awkward physical presence — as if she’s finally found her correct skin but can barely believe she’s been allowed to slip into it. Watching her try on sunglasses and sit at the vanity of Davina, a friend from her transgender support group, however, there’s also a certain radiance about her. Tambor’s latest character may be a late bloomer, but oh how magnificently she’s blooming.

HONORABLE MENTION | For two seasons, we’ve watched as time and again Masters of Sex’s unhappy housewife, Libby, vanished into the background of her marriage and, unwittingly, her spouse’s affair. So when, in a moment of breathtaking self-awareness, she confessed to co-worker Robert not only why she had become invisible but what a thrill it was that he saw her — even if he didn’t like what he saw — it felt almost as cathartic to us as to her. This was the scene we’d been waiting for — and probably Libby’s portrayer, Caitlin FitzGerald, too, because she didn’t so much perform Amy Lippman’s beautiful, brutal monologue as inhabit it. Wow. Just wow.

HONORABLE MENTION | Once we got over The Good Wife‘s latest shocking twist – Cary’s in jail! – we were left with another unbelievable sight, courtesy of Matt Czuchry: a scared, confused man where there was once a confident, take-charge lawyer. The pit in our stomachs only grew larger throughout the hour as the situation grew worse, the actor’s performance bringing home the fear and helplessness that Cary was feeling in his dangerous new surroundings. (Oh, my God, they cut him!) When Kalinda came to visit her friend-with-bennies in jail, Czuchry’s surprised, tearful stare — did you notice how he had to blink away the oncoming waterworks? — said it all: All hope is not lost.