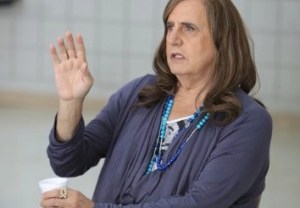 Don’t be afraid of Transparent, Amazon’s new comedy about a 70-year-old transgender woman breaking the news of her late-in-life gender transition to her three children and ex-wife.

Series star Jeffrey Tambor says that while the dramedy from writer Jill Soloway (Six Feet Under) is “unlike anything you’ve seen on television before,” his character Maura (formerly Mort) Pfefferman is totally relatable.

“We all know about secrets — to have that pressure of something you can’t reveal,” says Tambor. “That’s universal: ‘Am I safe? Am I gonna be OK? Will my family still love and respect me?'”

Nevertheless, Tambor isn’t about to pretend that Transparent — which began streaming all 10 of its episodes through Amazon Prime today — doesn’t have a political aspect. “We are in the midst of a civil rights movement,” he contends. “And not to put too much pressure on Transparent, but we are part of that revolution, we’re part of that re-education, we’re part of shining that light on an issue that needs to be illuminated, no doubt about it. Are we the answer? No. But we’re one of the answers. Will my performance change the whole thing? No. But it will be one more aspect where people can say, ‘I know a little more. I can relate to this. It’s just like my family.'”

Which isn’t to say the story of Maura and her eccentric clan is deadly serious. “There’s a lot of comedy in this show. And I believe in laughter as a curative,” Tambor says. “You can send a lot of instruction through laughter.”

That mix of comedy and drama has earned Transparent (and Tambor in particular) some pre-release Emmy buzz, although he says he hasn’t heard about it. “I’ve heard the term ‘game-changer’ about the series, but not about me,” the actor notes. “But anything that gives notoriety to the show and to Amazon, I’m for it.”

Transparent isn’t merely Maura’s story, adds the actor — already a six-time Emmy nominee for his work on Arrested Development and The Larry Sanders Show. “My story is one-fifth of this whole thing,” Tambor explains, noting that Maura’s kids (played by Amy Landecker, Gaby Hoffmann and Jay Duplass) and ex-wife (Judith Light) all have secrets of their own. “Some are very funny, some are very dark,” he adds. “Where you think we’re going left, we go right. I don’t know of another show on TV that’s like it.”

Tambor notes that one of his favorite scenes from the pilot episode involves Maura (still dressed as a man) gathering her children around the kitchen table — coincidentally, the first time all four actors shot together — and desperately trying to share her news with them. “That’s a very powerful scene. What I did feel, honestly, was the strength of that family,” he says. “And when I looked out from my eyes, I also saw these remarkable actors: Jay and Gaby and Amy. I immediately got the family. I immediately got their connections. They’re subtle, artistic killers — all of them. I’m not being humble, but it was their power in that scene.”

Tambor says he did a lot of reading and sought the help of consultants in the transgender community (Rhys Ernst and Zackary Drucker, specifically) to help gain a better understanding of Maura’s journey. Ultimately, though, “Most of the work was not so much the outside, but the inside of Maura,” he says. “There’s this adage in acting that’s quite beautiful: ‘You’re stuck with the character, but the character stuck with me.’ If you understand my drift, Maura [like Tambor] is 70 years old, has a bad left knee from arthritis, wears reading glasses.”

As a result, Tambor had no issues putting on Maura’s female clothing. In fact, his only squeamishness came during scenes where he had to get undressed altogether. “The shedding of any clothes, when you’re 70 years old, is tricky. I was a little nervous about showing my body, but not of putting on any of Maura’s clothes,” he explains. “That’s part of the character and part of the assignment. I loved it.”