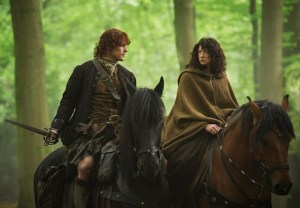 We have seen the future and it is black, jack.

Because if it’s not bad enough that the Outlander midseason finale leaves its heroine bent over a table with her skirts around her ears and a blade pressed to some very sensitive bits, we now have to wait seven months to see how everything resolves!

Good thing the Starz drama gives us plenty to think about in the interim. Chiefly: Who among us — particularly among those with well-worn copies of Diana Gabaldon’s novel — would’ve thought it possible to feel so much sympathy for Frank, Claire’s abandoned-in-the-future husband? Thanks to some added scenes and Tobias Menzies’ skill, Frank is far more present . I mean, I’m still an ardent admirer of Big Red, but now I feel just the tiniest bit bad about it.

So sing me a song of a lass that will be gone until April, and let’s review “Both Sides Now.”

THE LEFTOVER | We start the episode in 1940s at the Inverness Police Station, AKA Frank’s second home in the seven weeks since Claire went missing. He’s convinced the Highlander he saw outside their bed-and-breakfast is somehow involved. The cops are, too, except they think it’s far more likely that Frank’s beret-wearing suspect is Claire’s lover rather than her kidnapper. “My wife is not with another man,” Frank says testily…

SECOND CHANCE | … just as we cut to Claire with another man: Jamie. “Is it usual, what it is between us?” he asks her, eyes full of love and lust. “Is it always so between a woman and a man?” She acknowledges that what they feel is different than the norm, clasping his hand and looking just about as gone as he is.

The sweet moment is broken by an arrow hitting the ground near them, but no worries! It’s only Hugh Munro, a mute and crippled pal of Jamie’s who happened upon Dougal’s men and came looking for his friend. Upon hearing of the wedding, Hugh gifts Claire with a dragonfly preserved in a lump of amber. He’s got goodies for Jamie, too: news of an English deserter named Horrocks who says he witnessed Jamie’s escape from Fort William and will swear that young Fraser didn’t kill the sergeant he’s accused of offing. Horrocks wants to meet with Jamie, which makes the new groom giddy; if the price is off his head, he can take Claire home to his family’s estate, Lallybroch. (Side note: Jamie-Claire sex is hot, but Jamie-Claire hugs are damn near as satisfying. He just looks so happy.)

THE SASSENACH LEARNS TO FIGHT | Later, after Dougal’s gang sustains an ambush by some bandits, Jamie decides that Claire needs to learn how to defend herself. Ned hands her his sgian dhu — a tiny knife usually kept in one’s sock — and she wields it as Angus shows her where and how to strike to kill. The men, including Jamie, watch approvingly, and Claire looks so proud of herself as she marks what would be a fatal blow to Willie, who’s standing in as her tackling dummy.

Meanwhile, back in the 1940s, Frank meets up with a woman who says she knows where to find the Highlander. She’s lying, which Frank realizes two seconds before beating the MacSnot out of the two thugs who try to roll him for the reward money. The Rev. Wakefield’s housekeeper, Mrs. Graham, makes Frank aware of the superstition about the stones’ transporting powers, but Wakefield sadly joins the rest of the town in saying that Claire probably took off with the Highlander Frank saw in the rain. (I mean, she kinda did.)

So Frank eventually decides to give up the search for Claire and return to Oxford. Let’s take a moment to really consider how bereft he must feel, with the love of his life disappeared forever and — oh wait, nevermind; Claire and Jamie are about to have sex.

TERROR IN THE GRASS | As the Frasers sneak away for a quickie, he asks, “Does it ever stop, the wanting you?” (As someone who knows what the next few years of your life look like, James, I’ma say nope.) He rolls on top of her and illustrates the perks of having a husband who wears skirts (two-way easy access); on a related note, I love that the series is choosing to shoot the sex in a very real-life* manner, with the two of them talking to each other during the act, instead of using music and montage to make it look and sound like every other drama’s bedroom scenes.

The giddy lovemaking is going so strong, Mr. and Mrs. Fraser don’t realize they’re about to have a bad case of Redcoatitus Interruptus. One British deserter holds Jamie at gunpoint while another tries to rape Claire, an act that looks like it’s going to happen until she sticks her little knife exactly where Angus told her to. When the other deserter is distracted by his friend’s cries, Jamie knocks the gun away and slits his throat, then whisks a shell-shocked Claire to safety. Dougal warns Jamie that this Horrocks could be equally dangerous and announces that the group will back him up at the rendezvous. The threat of danger also makes Jamie leave a very pissy Claire behind with Willie. Her voiceover informs us that she’s mad at herself for losing sight of her plan; when Willie walks away to attend to some “personal business,” Claire wanders for a while and nearly trips over Craigh na Dun. As she runs toward the stones in 1743, Frank happens to be sobbing at the stones in 1945. Frank cries out for his wife and it seems like she hears him and shouts back… then some British soldiers grab her and life gets a lot worse very quickly.

GUESS WHO’S BACK? | She’s dragged to Fort William, which is governed by Black Jack Randall. He’s pleased to have her in his clutches once more, and though Claire bluffs a good game when she tries to make him believe that she, too, is under the protection of the Duke of Sandringham, the lie falls apart in spectacular fashion.

So then all there’s left for Randall to do is be the monster we know he is. He binds Claire’s wrists, cuts open her bodice and slams her down on his desk, where he’s gearing up to perform a nipplectomy (good Lord, Caitriona Balfe is a good sport) when the shutters on the window burst open.

“I’ll thank ye to take your hands off my wife,” Jamie growls. And… that’s it! See ye in April!

*”Real-life,” that is, for people who look like statues sculpted by the angels themselves.

Now it’s your turn. What did you think of the episode? Did you want to nibble on cute little Roger as much as I did? Are you already counting the days until April 4? Take our poll below, then sound off in the comments!