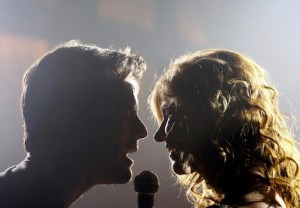 Nashville‘s Rayna Jaymes probably makes the right decision in the series’ Season 3 premiere, and I really, really hate her for it.

Before you angrily mobilize to spray-paint a giant “Deyna 4eva” on my house, hear me out. The best decision Ray could’ve made would be to come clean with both of her beaus: “Deacon, you are one Hot Pocket, but you and I need to figure. some. stuff. out. before we even think about doing this again. And Luke, the fact that I can’t do more than plaster a half-amused smile on my face in your presence probably doesn’t mean we’re the next Faith and Tim.”

Believe me, Deacon fans, I feel you: A big part of me really wants Rayna to reject Luke’s seven (!) karat diamond in favor of accepting Deacon’s very tempting marriage proposal… but that part of me is 15 years old, swoons over Dylan McKay (another bad choice) and wishes that her life had all the danger and passion of a Sunfire novel.

In short, that part knows nothing.

So no, Rayna didn’t make the best decision about her romantic future — but she also didn’t make the worst one, which would’ve been to repeat a mistake just because it is very sexy and has stubble and kisses her wrist in a manner that would undo most mortals. I want them together, too, guys; but this isn’t the time, place or circumstance that will make that work out swimmingly. Plus, we’ve got a whole season to fill!

In other news, Juliette is pregnant (shocker!) and Scarlett is a “girl-bro.” Read on for a review of what happens in “That’s Me Without You.”

ONE STEP FORWARD… | We start the episode at 6 pm on Saturday, with Rayna contemplating both of the rings pressed into her palm at the end of last season. Then we’re watching a very upset Juliette chop off her own hair with household scissors, muttering about how stupid she is. (Emily and Glenn’s unspoken dialogue: “We do not get paid enough for this bizness.”) The action cuts to The Bluebird, where NPR is gearing up to record a live special featuring Will and Deacon. And when we come back to Rayna, she’s calling one of the two men who proposed to her on the same day and saying, “Hey. So, I’m gonna come tonight. I love you.” But to whom are you talking, Ray? Settle in, y’all, because we’ve got about 52 minutes before that long-awaited answer arrives.

…TWO STEPS BACK | Because, as a title card informs us, it’s now 12 hours earlier. Luke and Rayna have a little morning nookie that apparently is so mind-blowing, they barely discuss their engagement. That gets saved for later in the day, when she visits his stables and — against Tandy’s advice — lets her current beau know that her former one stole his thunder the night before.

Luke is “more than a little ticked” about Deacon’s (baller) move, and he wants to know how she feels about it. “I feel… a lot of different things,” she replies. “I love you, but Deacon and I just have this thing.” Maybe it’s the aviators she’s rocking, maybe it’s some heretofore unexamined sucking pit of deep need in Luke, but it’s kind of amazing how Mr. Wheeler just sits there, hears her say she might not choose him and is totally OK with that.

DON’T LOOK BACK IN ANGER | Luke is going to a charity event that night, and he wants her to come with him. But Deacon’s playing that NPR show at The Bluebird, and he wants Rayna to attend. What will our girl do? She goes home to think, which takes the form of flipping through a memorabilia box from her heyday with Deacon. You know it’s gonna be a good night when we get a ’90s Deke-and-Ray flashback, and this one doesn’t disappoint. As the pair sing a sultry rendition of “Postcards From Mexico,” I take notes that read (verbatim): “They are hot, Deacon passed out drunk, flip phone, choker, OMG LUKE’S HAIR PONYTAIL RIPPED LONG SLEEVE SHIRT I CANT, so many chokers!” (Columbia Journalism School, Class of 2002, folks. My parents are so proud.)

LOVIN’ YOU IS WRONG | Her mind made up, Rayna goes to let Deacon down easy. “I have loved you, and I’m sure gonna love you for the rest of my life, but I love him now,” she says. “And he’s gonna give me something that I’m never gonna have with you.” Deacon, in response, kisses her hand and wrist and goodness, it’s warm in here. She starts crying. “Tell me you don’t feel that,” he whispers. Hell, Rayna, I felt that.

But it’s not to be. As Deacon performs a song he wrote for her at The Bluebird (live!, which we’ll get to in a minute), Rayna shows up at the charity event to flash her ring and kiss Luke in front of photographers. But that look on her face at the end of the episode? I wouldn’t start picking out china patterns right away, Luke.

CRAZY FOR FEELIN’ SO LONELY | When Juliette’s tearful and desperate attempts to make Avery forgive her literally drive him from his home, Glenn and Emily step in to make sure she pulls herself together in time to audition for a Patsy Cline biopic. Juliette’s inner despair leaks out while she’s singing “Crazy” for the filmmakers, but as it turns out, that’s exactly the kind of commitment to the role they’re looking for: She’s got a screen test! Too bad Juliette hacked her hair in a crying jag that looked like it physically pained Hayden Panettiere to perform. But a quick visit from a stylist fixes that, and a house call from her doctor looks like it will address her feeling under the weather… until he tells her she’s pregnant. (Side note: Meh. I’m sorry, Nashville. I love you, but I can’t even feign mild bewilderment at this turn of events.)

ROAD TRIP! | Scarlett wants to put Nashville and her less-than-awesome year behind her, and a very drunk and sad Avery tags along for the ride. So does Gunnar, inadvertently, who doesn’t believe Scarlett when she says she’s taking off and so gets dragged along on a very eventful jaunt. Highlights: Avery making a very good point about Scarlett’s life and then falling off the hood of the car, Avery trying to leap into the backseat to throttle Gunnar, Avery nearly getting his formerly punk tush handed to him in a bar fight. In the end, Scarlett listens to ex-boyfriend Number 2 and believes Gunnar when he says that she should just deal with her life in Music City rather than running away and trying to start over. The trio heads home, but not before Avery declares Gunnar his “bro” and Scarlett his “girl-bro.” (Side note: Props to Jonathan Jackson, who manages to play drunk without making me hate him, which is a hard thing to do.)

FAR-TOO-CANDID CAMERA | Will performs at The Bluebird as part of the much-touted live show that also includes Deacon and Florida Georgia Line. Chris Carmack, Charles Esten and the band sound great; the footage, however, looks a little daytime-soapish, which in turn is a little jarring compared to the rest of the episode. But props to the actors; these guys definitely have chops.

Before and after the performance, though, we see Layla unable to handle the revelation Will dropped on her the night before: He’s gay. So they tell Rude Reality Producer Woman that they’re splitting up and want out of the show, and she counters by blackmailing them with the footage of Will’s confession, caught by the secret camera in their bedroom. Looks like you’ll be Soup fodder for a while longer, kids!

Now it’s your turn. Grade the premiere via the poll below, hit the comments to back up your choice, and then scroll through a gallery of new images from the season ahead!