Next to no time will have passed when ABC’s Grey’s Anatomy opens Season 11 this Thursday — now in an earlier 8/7c time slot — and yet Dr. Jo Wilson is about to be prescribed some new, unanticipated drama.

Because in the wake of Cristina’s decision to take a job far, far away, Meredith will choose Alex to fill that void, as her “person.” And for someone who is able to get Alex to open up on a good day, Jo is caught off guard by the new demand on her beau’s time.

Here, British beauty Camilla Luddington previews all that’s ahead for Jo (including orbiting an Oscar winner), talks up the deadly Pact she made and teases her latest adventures in tomb raiding.

TVLINE | So the new season picks up, like, 24 hours later?
Yeah, I think maybe even less. You kind of just run right into the drama.

TVLINE | And what fresh drama awaits Jo?
Well, Meredith is leaning on Alex as her new “person,” because Cristina’s gone and he is the last remaining original intern. And — because I was trying to think back about this – I think Jo’s never actually witnessed that relationship before and the depth of it and how, with all of that gang, there were kind of no boundaries. It was like a family. So she sees that and is kind of taken aback, and is jealous, and doesn’t really know what to do. She wants to play it cool, but Meredith kind of wedges herself right into that relationship. It makes for some drama, but it makes for funny moments, too.

TVLINE | Is Jo jealous of the amount of time Alex is spending with Meredith, the quality of the time, the intensity…?
All of the above, all of it. I mean, if I was in that situation, I would have a fight about it because it’s way too much. But of course, for [Alex and Mer] it’s normal. He’s the person that Meredith wants to talk to constantly and Jo’s thinking, “Where has my boyfriend gone?”

TVLINE | What’s Jo’s take on what Cristina left for Alex? Is she like, “You hit the jackpot”? That it’s a sign for him to come back to the hospital?
Jo has that competitive nature in her, so it’s all about Team Alex, which you kind of get in the first episode. She thinks [joining the board] is the right thing to do, because Alex did have reservations about the job with “Dr. Butthole,” but he needed the money because he’s not very good at keeping up with his bills, as Jo discovered, horrified. To get on the board and be back at Grey Sloan would be the best of both worlds. Whether he gets on the board… you guys will have to find out.

TVLINE | On a scale of 1 to 10, where would you put their relationship right now?
It’s kind of not been addressed yet, so I would say maybe a 5 or a 6. Because these two aren’t very good at communication. We know this. I mean, they really have to get it together. Jo really doesn’t want to have “that conversation” with him and there are episodes where she says, “Hey, I need some time with you.” She wants to play it cool, but that never helps.

TVLINE | OK, enough about Alex. Is Jo feeling any solidarity with Stephanie, the other “surviving” member of Season 9’s intern class?
Actually, in the couple of scenes they have together, they’re very competitive, believing they now have a chance to stand out. They’ve seen someone fired, so it’s like, “OK, I really have to step it up or else I’m going to go too.” [Leah getting fired] kind of lit a fire under them. Except Jo also does kind of lean on Stephanie as a sounding board for her relationship with Alex.

TVLINE | What other storylines do you get to dip your toe into?
In the first episode, Jo is dealing with a case that she doesn’t want to be on. A couple has been trapped a car and they’re in a very compromising situation, having been involved in some “intimacy.” But Jo gets voted to go inside the car and help them.

TVLINE | Anything with Academy Award winner Geena Davis?
Oh, my gosh, I have had a couple of scenes with her, yes. I felt very cool. Her character is definitely someone to be afraid of. Jo always wants to be successful and for people to like her, and she’s someone that she wants to impress, but she’s so wonderful that it’s very difficult to do that.

TVLINE | You star in The Pact II, which has been on VOD and hits theaters Oct. 10. Scariest thing you’ve ever done?
Yeah, probably. And you know what? I’m a huge horror movie fan, so I was excited to do something like that. When I watched the first movie [starring Caity Lotz, Arrow], I thought it was kind of creepy, so I thought, “Why not?” I definitely got some bruises doing some crazy stunts.

TVLINE | What happens to your character throughout the movie is quite disturbing.
It’s very messed up. I think actors always are attracted to characters that are a little bit disturbed and messy. She has a lot of issues with her mother, and there are points in the movie where she’s sort of questioning whether it’s all in her head.

TVLINE | Lastly, tell me what’s new and exciting with Tomb Raider…. [Luddington once again portrays Lara Croft in the latest videogame entry, Rise of the Tomb Raider, due out in 2015.]
I posted a picture of this, but I haven’t really spoken to anybody about it….. Usually with motion capture you have little dots on your face, and it’s 90 points of reference. The new thing they have is a fluorescent paint that gets airbrushed on your face and is over 7,000 points of reference. 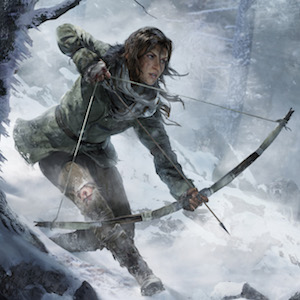 It makes for a much more realistic [motion] capture.

TVLINE | Does she thus look more like Camilla Luddington than ever before?
When I got [cast for 2013’s] Tomb Raider, they had already made the face for Lara Croft, meshing a bunch of different features from people. And then they put some of my features into her. So it’s not that she’ll necessarily look exactly like me, but every single muscle that I move in my face, she’ll do the same thing — which is nuts.

TVLINE | What’s your favorite thing to do with Laura when you’re playing Tomb Raider yourself?
I’m really terrible at my own game, really bad. I know how to kill people — it just takes me forever. So when I finally kill the baddies, that is the best thing for me. And every time I die, I cringe!