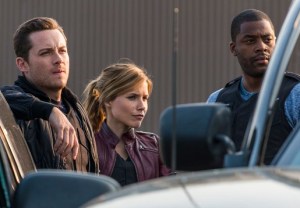 Is Chicago P.D.‘s Voight a murderer?

The Season 2 premiere on Wednesday answered that question, as Jin’s killer was revealed.

The hour opens with Voight sitting before an investigative panel, denying that he has any info that will lead to the arrest of the culprit behind the crime in question. Meanwhile, Halstead receives a package from the deceased detective containing a thumb drive and a note that reads, “I know I can trust you.” After learning that Jin was working with Internal Affairs, Halstead goes to Lindsay and asks her if there’s any chance Voight was mixed up with them.

“Don’t get stupid on me now, Jay,” she replies. Lindsay really has a blind spot when it comes to Voight.

Something convinces Halstead to get over his suspicions and give the thumb drive to Voight, who confronts IA agent Stillwell. Turns out Jin had a wire recording of Stillwell blackmailing him and threatening his life. The suit counters that if Voight takes this information higher up, he’ll tell everyone about their deal. So either Voight goes down the tubes or he walks away and Jin’s murder goes unsolved.

As for Jay, he wants the thumb drive back, but Voight won’t hand it over and says he’s handling it. Once again, his suspicions are on high alert when he realizes his boss is going to bury the case. “Do you really think that you know everything about this guy?” he asks Lindsay.

A visit from Jin’s sweet, unsuspecting mother gets Voight to have a crisis of conscience and hand over the information in the file, leading to Stillwell’s arrest. He also comes clean to his team about his deal with IA to put himself out there as dirty in order to take down high-level criminals. (Lindsay’s hurt-but-so-clearly-not-trying-to-show-it look sums up her feelings about the man she thought she knew.) When Stillwell fights back by revealing their partnership, Voight’s bosses ask for his gun and badge until they finish their investigation. But Voight has another trick up his sleeve. Jin cast a wide net, and so, Voight has dirt on the Chief. He caps off the day by taking some cash from his secret stash and giving it to Jin’s father to pay off gambling debts. A nice gesture, even if the money is probably not clean.

* Nadia starts her first day as the department’s secretary, fielding a lot of unreturned calls from Bunny, aka Lindsay’s mom, who’s getting married. Lindsay’s nonchalant response: “Great. Email me.”

* Burgess gets a new partner, Sean Roman, who doesn’t seem thrilled to have a female at his side. Burgess whines to Ruzek – it gets interrupted by hanky panky – and then finally confronts Roman, who reveals he fell in love with his last female partner, hence the tension.

* Antonio gives his informant a chance at a new life .

* A notorious criminal has put a bounty on Halstead. Oh boy!

Chicago P.D. fans, what did you think of the episode? Grade it via the poll below, then hit the comments to expand on your thoughts.