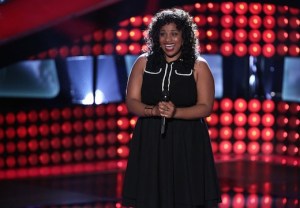 This just in: It might be time for Blake Shelton and Adam Levine to sit out a cycle of The Voice.

Seven seasons in, the show has unearthed a coach so sincere, so charming, so deeply and beautifully connected to the music, that it’s hard to imagine any sane contestant from any genre not gravitating toward him. I speak, of course, of Pharrell Williams, and thanks to my penchant for live-Tweeting reality competition series, I know I’m not alone.

RELATED The Voice Season 7 Premiere Recap: Do You Si What They Si?

In fact, the crazy-beautiful @jaykayort shared during tonight’s second episode of the Season 7 Blind Auditions that Pharrell is “so perfect,” and “every word he says is so convincing” that if he told her to burn down her house, she’d surround her house with kindling and a light patina of kerosene and burn that mother down. (See evidence below.)

@MichaelSlezakTV @Pharrell @NBCTheVoice no he's perfect and every word he says is so convincing if he told me to burn down my house i would.

Yes, one might think the man who brought us “Happy” — and “She Wants to Move,” among many other underappreciated gems — is poised to become Season 7’s breakout star, except for the fact that he seems far more interested in the prospects of the contestants in front of him.

Before this recap turns into the “Pharrell Williams Superfan URL,” however, let’s count down the eight hopefuls who advanced to the Season 7 Battle Rounds in order from least- to most-promising:

8. Joe Kirk, “Lego House” (Team Adam) | A gorgeous head of hair does not a viable pop-star make. (OK, yeah, it does in the soulless world of major labels, but we can do better Voice addicts!)

7. Sugar Joans, “Chain of Fools” (Team Gwen) | I liked that Gwen said she wanted to bring out the personality in Sugar’s generic soul-chick vocal stylings, because while she possessed pitch and power, her Aretha cover was ultimately as generic as store-brand mac-and-cheese.

6. Menlik Zergabachew, “Santeria” (Team Gwen) | Confession: The dad in me had a really hard time getting past the “I dropped out of HIGH SCHOOL” to gig around as a musician. (¡Ay dios mio!) But the handsome kid’s languid reggae delivery was enjoyable, even if it lacked in the dynamics department.

5. Reagan James, “Give Me Love” (Team Blake) | Gack! How is this poised, professional vocalist only 15 years old? Still, while Reagan had major charisma and stage presence, her voice got a wee bit shaky on the big notes. I can forgive that if it was high-school sophomore nerves, but my gut says maybe she needed another year or two to be truly prepared for the brutality of the Battle Rounds.

4. Taylor Brashears, “You Ain’t Woman Enough (To Take My Man)” (Team Blake) | Taylor’s speak-sing twang and conversational delivery aren’t the usual tools for a reality singing competition champ — nor was her description of her face as prettier than her brother’s — but I liked her authentic connection to classic country, and the hand-on-hip confidence of her delivery. Is it crazy, though, that I think she might have fared better on Team Pharrell? I mean, dude dropped a Barbara Mandrell reference, for cryin’ out loud!

3. Taylor Phelan, “Sweater Weather” (Team Pharrell) | Pharrell’s note that Taylor was “so melodically articulate” was bone-chillingly true. The dude took interesting liberties with the tone and tempo of his modern-rock cover and somehow made it all his own without a hint of Frankensteinian DNA alterations. He’s kind of like American Idol’s Alex Preston – without the nagging stage-presence issues.

2. Danica Shirey, “Big White Room” (Team Pharrell) | I winced a little at Gwen’s lobbying that she could help the supple-voiced Danica with her styling and overall look — maybe because there was a glaring truth to the fact that on voice alone, there’s no reason she shouldn’t already have a major label deal. Still, the slinky, soulful, sexy nuance of her phrasing, the way she chose to caress notes rather than brutalize them, makes me think she and Pharrell could be a very very very powerful pairing.

1. Maiya Sykes, “Stay With Me” (Team Pharrell) | Yes, Maiya’s backstory — “She’s not my burden, she’s my mom” — made me go a little misty, but it was her ability to unzip Sam Smith’s modern soul classic, step inside it, and completely inhabit it that got me truly excited. For a woman who’s spent years on California’s Armenian Wedding Circuit, Maiya has very few cheesy affectations. And while she lost a bit of control on the big notes, isn’t that what the song ultimately requires?

On that note, then I pass the mic to you. Who were your favorites from Season 7 Episode 2? Are you as obsessed with Pharrell as I am? Take our polls below, then sound off in the comments!