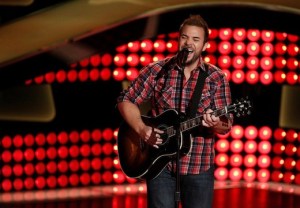 I’m too lazy to Google it, but I’m pretty sure Jim Carrey had movie maybe 10 years ago where his character said “yes” to everything, all the time, immediately.

Somehow, that same madcap spirit seems to have infiltrated Season 7 of The Voice — where Adam Levine, Blake Shelton and newcomers Pharrell Williams and Gwen Stefani were slapping their buttons and turning their chairs not just from the opening three notes, but in some instances from the first pre-performance throat-clearance.

Seriously, for people who’ve got all the power in the world going into the Blind Auditions, the current panel of coaches sometimes come off more eager and (in some cases) more desperate than a low-level Kardashian (the one who’s not Kim or Khloe, of course) with the scent of a TMZ camera crew on the wind.

Which isn’t to say the Season 7 premiere lacked viable talent. Because ultimately, like any other reality singing competition, The Voice lives or dies based on its ability to attract mega-talented vocalists to its 15 million-person party. And tonight’s opener gave us three or four viable contenders for Josh Kaufman’s tiara and sash. So without further ado, let’s count down the eight hopefuls who advanced to the Season 7 Battle Rounds in order from least- to most-promising:

8. Taylor John Williams, “Heartless” (Team Gwen) | Somewhere, Kanye West is composing a STRONGLY WORDED TWEET blasting Taylor for turning his R&B jam into musical Lunesta. Oh sure, American Idol’s Kris Allen did an acoustic “Heartless” to great success back in the day, but his rendition was snap-pop-crackling with electricity; Taylor’s reimagining replaced all the guts and passion with colorless gruel. Blech!

7. Luke Wade, “That’s How Strong My Love Is” (Team Pharrell) | Maybe I missed something, seeing that this fella got all four chairs to turn within the opening seconds of his blind audition. But there was something so nondescript about Luke’s tone and delivery that his Otis Redding cover disappeared from my brain faster than a bowl of Pringles placed within arm’s reach of a low-carb dieter.

6. Damien, “It’s So Hard to Say Goodbye to Yesterday” (Team Adam) | TSA agent who survived a harrowing shooting incident at LAX brought huge emotion to this treacly Boyz II Men jam — but his inability to fully control said emotion intermittently clogged up his tone and clarity. I’ve got my doubts that the uni-monkiered singer will withstand the rigors of the Battle Rounds.

5. Clara Hong, “Chuck E’s in Love” (Team Adam) | Clara showcased a cool, smoky tone on the opening half of an unexpected Rickie Lee Jones jam, but she loosened her grip on pitch and hit a few flat notes when she opened up and went for the big notes on the chorus. Pharrell might’ve been able to bring out her best, but I’m guessing she’ll be Battle Rounds fodder in Adam’s hands.

4. Bryana Salaz, “Problem” (Team Gwen) | Gotta give props to this 16-year-old for tackling an uptempo jam that’s not an especially obvious vocal showcase. And while the end result wasn’t entirely spotless, there was just a little touch of star quality to Briana’s delivery and stage presence that intrigues me — especially if Gwen can steer her toward youthful jams that still possess some heart and soul.

3. Allison Bray, “Merry Go ‘Round” (Team Blake) | Season 6 reject came back with one of the coolest country jams in recent memory, and slayed it with a sweet tone and a refreshing lack of embellishment. If Blake lets her make occasional forays into her second love — classic rock bands like Aerosmith and Guns ‘N’ Roses — she could be a peroxide-blonde dark horse.

2. James David Carter, “Nobody Knows” (Team Blake) | Hunky former athlete didn’t show an ounce of nervousness, as Pharrell noted, which allowed him to breathe vivid life into the lyrics of the Tony Rich Project ballad. Blake likes hyperbole more than I hate those Sprint “framily” ads, but his assessment that James’ performance may have been the show’s all-time strongest country audition sounded pretty right-on to me.

1. Elyjuh René, “XO” (Team Pharrell) | I had my concerns that Elyjuh would be a no-chair turn when he and his mom showed up in matching black-and-white cheetah-print tops, but this is The Voice — where nobody gets set up to take a face-plant. And lo and behold, the kid with the outsized personality and infectious smile brought an urgency and innocent charm to Beyoncé’s romantic midtempo jam that was both current and unique. Even more encouraging, his instantaneous emotional connection with Pharrell created the kind of “Do I need a Kleenex?” feelings required to win the fan vote.

And on that note, I pass the mic to you. Who were your favorites from the Season 7 premiere? What grade would you give the episode overall? How did Gwen and Pharrell fit into the mix? Take our polls below, then sound off in the comments!